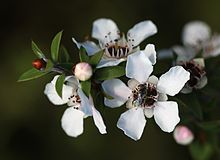 While at my bee supplier's we got to talking as usual about bees.  He showed me a picture of a horse's injured foreleg.
The owners were struggling to save the horse's badly injured and infected leg.  If it couldn't be saved the horse would have to be put down.  They tried antibiotics but they weren't working.  Thank goodness they heard about the power of honey to cure wounds.  They used honey on the wounds and the horse's leg healed and was saved.  The picture was of the horse's healed leg.
I'm sure you've heard about the antibacterial and antifungal power of honey.
The ancient Egyptians knew all about honey and now modern medicine is learning to turn back time and use ancient methods when modern ones fail.
I've seen documentaries in hospitals where leeches were used to keep blood flowing through reattached fingers.  If not for the leeches work to keep the blood flowing through the reattached limb, the person would lose their finger.

Now, back to honey.  I was watching one of my favourite shows on Animal Planet called Supervet.  There was a dog's paw that was badly crushed.  The vet had to take pieces of bone from the dog's hip to create new foot bones.  It was a really complicated surgery.  As often happens after an invasive surgery tht takes a long time to heal the dog's paw eventually became infected.  They were using antibiotics and they weren't working very well.
The Supervet (who really knows his stuff) used Manuka honey.  I watched as he poured the honey into and onto the wounds.  And I'm sure you know the outcome.  The dogs paw healed up beautifully.  The vet is using medical grade Manuka honey for his clients but all honeys have healing powers because of their antibacterial and antifungal properties.
Manuka plant (also called tea tree) is well known to be a powerful healing agent because of the properties of the manuka plant itself which is in the honey.
Manuka honey is often used by hospitals to put on foot ulcer's of diabetic patients.  These ulcers are hard to heal and often don't respond to antibiotics.  That's when honey steps in to save the day, and the patient's foot.
Manuka/Tea Tree honey is harvested in New Zealand and southeastern Australia.  Manuka honey is highly valued and sells at a premium to medical organizations.
Posted by Bee Magic Chronicles for Kids at 5:54 PM 1 comment: 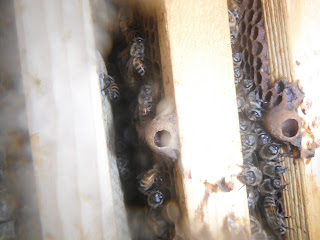 At the Pines yard last week I have 6 hives.  They're all slow right now as they're requeening.
During that time the number of foraging bees drops off as the whole population decreases while we wait for the new queen to hatch, mate and get back to the hive and start laying eggs.
Then we have to wait for the eggs to hatch. 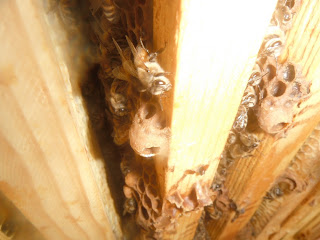 It's about 30 days in all until the population starts to pick up again as new bees are hatching.
I find it a little concerning as the days go by and the population is low.  I worry whether they have been able to requeen successfully or not.
Now it's true you can open the hive and inspect, but how many times have you found that when pulling frames the queen cells get crushed or disturbed. 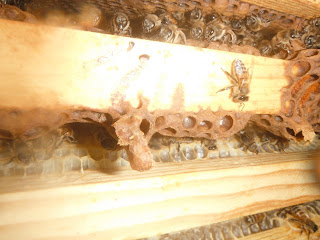 The bees put them close to the bottom of the frame, or hanging down in the spaces in the frames.  Too many times I've pulled frames (and I do it very carefully and I also heft and look underneath first) and I still damage cells.
Nothing is more frustrating than damaging a beautiful fully capped queen cell.  So instead I stay out of the hive for the 30 day count just to be sure I don't muck things up for the bees. 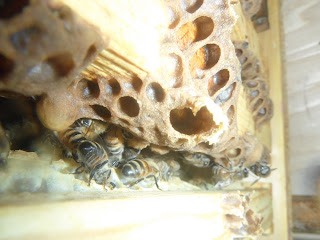 After the 30 days I check for brood and if there's none then I will go to another strong hive and steal a frame that has eggs so that the queenless hive can make another queen.  I'll steal one frame per week (to a max of 3 and often from different hives) until I see a queen cell started.
At the started stage a queen cell is like a button or a nub and not so easily damaged on inspection.
A couple years ago while doing a split I had three full size capped queen cells break open and the fully developed queens ran up into the hive.  One of the cells broke open and I put my hand under it and the queen dropped out right into my hand.  The good news was that I had another hive that was queenless so I just popped her into their front door.
Posted by Bee Magic Chronicles for Kids at 9:38 PM No comments:

Posted by Bee Magic Chronicles for Kids at 9:15 PM No comments:

Finally in June 2014 the Ontario government has released new regulations on the issue of neonics.


You can read the full article at this link:  http://news.ontario.ca/ene/en/2015/06/regulating-neonicotinoids.html or the pasted article below:

June 9, 2015 1:30 P.M.
Ministry of the Environment and Climate Change
A growing body of scientific evidence shows that neonicotinoid insecticides are highly toxic to honey bees and other beneficial insects.


In Ontario, there is widespread use of neonicotinoid-coated seeds, in some cases, without evidence of pest problems. Close to 100 per cent of corn seed and 60 per cent of soybean seed sold in the province are treated with neonicotinoid insecticides.

Ontario conducted a comprehensive, two-stage consultation process with the public and stakeholders to develop these new regulatory requirements. In the first stage, a pollinator health discussion paper was posted online in November 2014 for a 60 day public comment period.


Farmers, members of the public and other stakeholders were invited to attend in-person consultation meetings held across the province or submit comments online or by mail.


In stage two, Ontario released a draft regulation for public comment on March 23, 2015, inviting interested parties to submit feedback on the regulatory proposal. In addition, a series of technical briefings were held with key stakeholders.


A new class of pesticides created under the regulation

The province is responsible for classifying pesticides and regulating their sale, use, transportation, storage and disposal. Treated seeds are seeds that have been coated with a pesticide. The new regulatory requirements will create a new class of pesticides -- Class 12 -- for corn and soybean seeds treated with the following neonicotinoid insecticides:


A new system for regulating neonicotinoid-treated corn and soybean seeds

Ontario is establishing a system for regulating neonicotinoid-treated seeds that:
The new regulatory amendments will take effect on July 1, 2015, and be phased in over time.


As of August 31, 2016, any person (e.g., a farmer or a person that supervises the planting of neonicotinoid-treated seeds) who purchases neonicotinoid-treated seeds will be required to have been certified by completing the integrated pest management training course. The course includes training on the importance of pollinators for the ecosystem and how to protect them from pesticide exposure.
Individuals will also be trained in identifying pests and pest scouting methods, and using alternative methods to pesticides. Licensed treated-seed vendors will not be required to complete the integrated pest management certification.


New requirements for using neonicotinoid-treated corn and soybean seeds From August 31, 2015 to August 30, 2016

In preparation for the 2016 planting season, farmers will have the option to take one of two courses of action to purchase and use neonicotinoid-treated corn or soybean seed, depending on the amount they intend on planting.


As an incentive to achieve early reductions in the use of neonicotinoid-treated seed, farmers will not have to conduct a pest assessment if they plant neonicotinoid-treated seeds on 50 per cent or less of the total area of where their plant corn or soybeans. They will need to provide written confirmation to the sales representative or seed vendor from which they purchased the seeds.


If farmers want to buy and plant neonicotinoid-treated seeds on more than 50 per cent of the total area of their corn or soybean crop, they will need to complete a pest assessment report and provide it to the sales representative or seed vendor from which they purchased the seeds.

In preparation for the 2017 planting season, if farmers want to buy and use any amount of neonicotinoid-treated seeds, they will be required to provide:
Farmers will need to submit these pieces of information to the sales representative or seed vendor, including direct-to-farm seed vendors.


Pest assessments assist in identifying pest problems above thresholds. Pest or stand loss thresholds must be met in order to determine that neonicotinoid-treated seed is allowed to be used.
The two pest assessment methods that can be used to determine pest problems are:
The pests and other details, including population thresholds and averaging for soil pest scouting, are set out in the Pest Assessment Guideline.


Those who plant neonicotinoid-treated seed will need to read and follow instructions that are required to be set out on the seed tag, such as avoiding equipment maintenance in areas that may affect bee colonies or where bees are foraging.


The regulation does not include requirements for the transport and storage of neonicotinoid-treated seeds.


Tracking the sale of neonicotinoid-treated seeds


Changes from the draft regulation

Posted by Bee Magic Chronicles for Kids at 11:32 AM No comments: 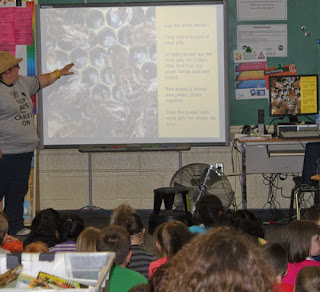 One of the most fun and best ways to spread the word about bees is by educating primary school children about bees.
They have many questions and are eager to here about this fuzzy insect that makes honey. 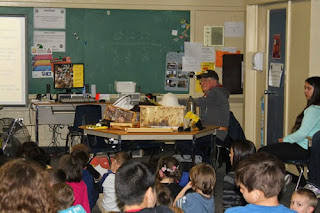 If you're interested in presentations, I've already prepared a Powerpoint slideshow that you are more than welcome to use.
You can even run it from my web site on the school's Smartboard so you don't even have to download it.  It's at:  http://www.bee-magic.com/teachers.aspx .
I use the same presentation for both adults and children.  I just change the amount of science that I explain and I also use simpler wording for the young children.
We also have a display that we can use in good weather to enclose a frame of bees.
Posted by Bee Magic Chronicles for Kids at 9:27 PM No comments:

Labels: free slideshow for bee presentations for teachers or beekeepers 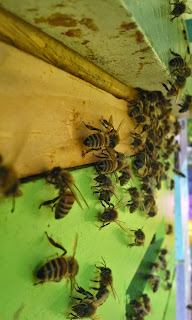 This study is being conducted by Novometrix Research Inc. an independent contract research organization.  The study is led by President Dr. Jeff Wilson, a veterinarian and PhD Epidemiologist.

The study has been endorsed by the Ontario Bee Association and we'd like all beekeepers in Ontario to participate.

The purpose of the study is to determine how to keep Ontario bees healthy and they are asking questions about your 2014 season:


Here's the link to the survey:  http://healthybees.buzz/
Posted by Bee Magic Chronicles for Kids at 12:25 AM No comments: