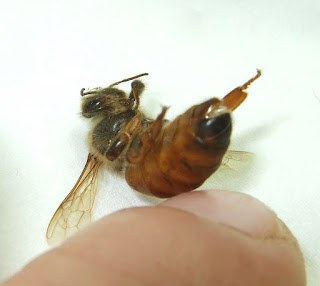 I'd read about visual cues for bees and I started to put different stickers on the fronts on my hives to help bees get back to the right hive.

Ever since I lost a queen who I found dead from a sting outside a hive I've added visual cues for the bees.  She had been on a mating flight and even still had drone parts in her rear.  I believe when she returned from her mating flight she went into the wrong hive.  At that time I had both hives identically painted and sitting side by side.

Now if the hives are side by side I change the orientation of the front, even if it's only by 10 degrees because the differences aid the bees in returning. 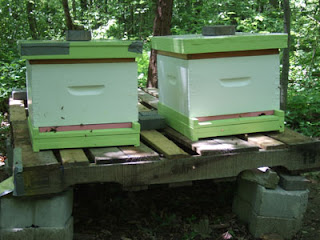 A few weeks ago I collected a small swarm from Home Depot.  They had landed on patio furniture at the front door.  As I swept the bees into the box I could tell these were young and inexperienced bees with a virgin queen because the swarm was small and that they were home scenting in multiple locations and took longer to figure everything out.

I wanted this hive placed in my yard with lots of drones so the queen could get mating done safely and get to the business of laying eggs.  I put a piece of black gorilla tape about 1 1/2" to the left of their top entrance as a visual cue.  I especially wanted their new queen to get back into the right hive after her mating flights. 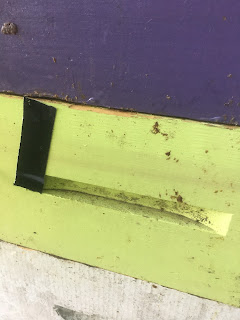 [Photo - green super was the top box with tape marker to the left of entrance.  New purple super added and tape moved up to the new entrance]

A few weeks later I checked and the queen was busy laying and they had capped and opened brood.  I went to add a super and I removed the tape from the lower box and moved it up to the same position on the new super.

What was really cool was to watch how the returning foragers focused on that black tape.  They flew to it, hovered for barely a second and then glided 1 1/2" to the right and went right into the hive.  They had instantly found the new adjusted entry without confusion because of the tape marker.

That day was a really busy foraging day so the bees were returning in large numbers.  So, sorry I didn't video that day but on another swarm hive I videoed the same thing so I hope you can see how they use the tape as a locator for their entrance.

Each piece of tape on the front of each hive is placed differently so avoid confusion.
Posted by Bee Magic Chronicles for Kids at 7:48 PM No comments: