Life can be a beach if you're a bee.

Everyone needs water.  Without it we don't last so long.  With quite the drought going on in my area I noticed how bees were quick to lick up every drop of water that I spilled in the yard.

They'd even land on the wet dirt after I watered the garden.  So I decided to set out some water for them.

The biggest problem for bees and water is drowning.

I put two small Tupperware containers full of water out, high enough up that raccoons can't mess them up.  I laid many pieces of grass across the surface to give the bees a landing spot.


So far I haven't seen any drowned bees.

I also put my Styrofoam hive feeder on the robbing table, but filled with water.  But so far I haven't seen bees making use of it.

An instructor from my bee course advised that the best way to build a water feeder for bees is to create a beach.  He suggested a plastic child's pool be put in a slanted position.  Then pour sand in it and finally water.

The tilt puts the water to the back and leaves a beach area for the bees to land on.  They don't even have to walk to the water's edge to drink.

I thought I'd try that next.
Posted by Bee Magic Chronicles for Kids at 11:11 PM 1 comment:

We're in a dearth in southwestern Ontario.

With our strange spring blowing hot and then cold the bees missed out on the nectar and pollen from the fruit trees.  There are no apples or cherries this year.


Then it got warm again and flowers bloomed.


But now it's as if the creek's gone dry.  Not too many flowers have been in bloom.  We haven't had any significant amount of rain for a long time.

I put extra supers on three weeks ago and most have only one or two frames of drawn comb.  I know the bees are workaholics so if they are able in any way, they'd be building combs and filling them.

I can feel for the bees.  They're feeling a bit unemployed.  You know bees:  They need something to do to keep them happy.  They're so much like me!

I had a large roasting pan that was full of wet cappings from the capping tank from last season. I could tell you that I kept them to give the bees in a time of dearth but I don't plan that far ahead.

Truth is I've been so busy that the pan sat forgotten.  Until now.

This would give the bees something to do.

So I played Santa Clause.  I spooned out some honey on the front porch of each hive.  Just a little appetizer.  Then I put the roasting pan on my robbing table.

The robbing table is covered with plastic sheeting and a piece of corrugated metal which provides protection from the rain.

[Photo - a leftover piece of granulated honey in the comb.  The bees certainly don't care].

They'll clean all the honey up and leave behind the nice clean wax which I'll use to make candles.


I did notice Queen Anne's Lace is coming into bloom though I'm not sure if they work that flower much... but I have tasted jam made from the blooms and it's quite delicious.

My friend Henry said that we might not get any honey this summer except from soya beans.

I think he might be right.
Posted by Bee Magic Chronicles for Kids at 12:00 AM No comments:

Sometimes we're so prepared for the 'big one' that it's a tiny little thing that takes us off guard.

My beekeeping friend Henry calls these little ones the Queen Killer.

So what is it?  When the inner cover is off and you look down at your frames often you'll see that the bees have built comb attaching the frames together. 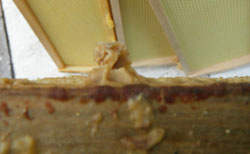 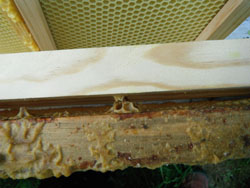 To the bees, these are wax bridges that allow the bees to more efficiently travel from one frame to the next.  Just think, without the bridge they'd have to climb down the frame, walk to the end, cross the front or back of the hive to the next frame.  That's like taking the long way to work.  And you'd be late too!


The photo at the top shows several of these bridges that the bees built connecting the last frame in the hive.

The problem with them is that they stick out.  So when you lift out a frame the wax nub scrapes the adjacent frame while you pull it up.

The projecting bridge will kill bees as it scrapes along... and if the queen happens to be in the way, she can be killed.

Projecting bits of wax may seem innocent but keep an eye on them when removing frames, or scrape them away.

[Photo - a bee bridge between an old frame and a new one.  I find the bridges helpful when putting frames back - you'll know if you have the frame the the right way around because they fit back together like puzzle pieces.]

Bridges aren't so dangerous once a frame is removed, then subsequent frames can be shift over making more room to lift out frames without scraping.
Posted by Bee Magic Chronicles for Kids at 11:26 PM 1 comment:

Planting the Honey of a Garden 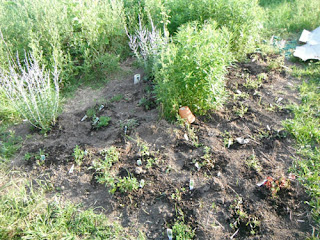 After reading the Honey Handbook I feel so much more informed as I prepare to put in a garden for the bees.

The Honey Handbook focuses on how to produce great flavoured honeys.  And nothing helps the bees do that more than right right kind of plants.

I'll never forget lifting the lid off the extractor after our first extraction.  The smell was like tomatoes and sweet chilly peppers.  Not what I thought honey should smell like.  The taste was different too.  I wondered what on earth the bees had gotten into.

The honey did mellow in flavour and it soon became my favourite.  I think the flavour came from Garlic Weed, an invasive plant not native to Ontario.

Plants give both flavour and colour to honey.  Stronger colours indicate a stronger flavour.  Think of Goldenrod honey from the fall and it's dark golden colour and then Buckwheat honey which is dark brown. 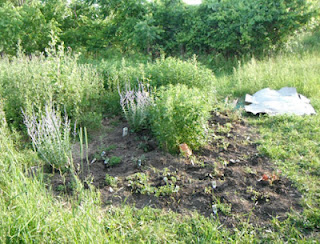 If you haven't tried these other honeys you should visit a beekeeper who carries this range of flavours and try them yourself.  If like to do that with friends and do a taste parade.  I set out each flavour and let them try it.  Some of these flavours I've purchased, such as Buckwheat.

The top plants recommended by the Honey Handbook to create a lovely light minty tasting honey are: Sunflowers, Thyme, Lavender, Peppermint and Borage.

The photo shows my small start.  I've learned to keep plantings close together to discourage weeds.  I left the large clumps of golden rod and asters.

I also planted Russian Sage.  I have no idea what its honey will taste like but every summer when it blooms the honey bees in my area go crazy over it.  It has a very fragrant sage aroma.  I wonder if it may help deter mites.
At my office downtown there's a shrub across the street which at this time of year is completely covered in little white flowers.  It's very fragrant and can be smelt from yards away.  I like the smell.  It's common privet.  So I cut some clippings in spring and put them in water and they have put out roots.

I also bought a couple shrubs to plant in my yard.  Any foraging bees in my area would be welcome to come and forage from it.  But the book says that common privet, although bees love it, produces an awful tasting honey.

I've heard this same thing about the almond honey produced in California.  That honey is inedible--or at least tastes terrible.  So California is all about pollination.

Mono floral honeys can be sold for more money and because bees practise flower fidelity--sticking to the same flower while foraging--it's possible to collect these precious honeys.

Plants can mature very quickly and peppermint is an herb that can be invasive which is great if you want a lot of it in a short period of time.  And I do.
Posted by Bee Magic Chronicles for Kids at 7:57 PM 4 comments: