My Sister, the Secret Beekeeper 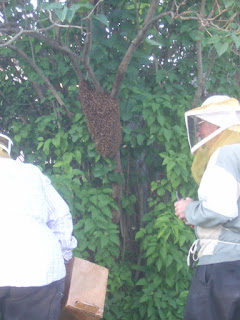 Seven years ago I had not yet become a beekeeper. I was busy doing tons of research on bees.

It was 2007 and I was about to start writing a children's novel about honey bees (I'm still working on it).

I held off getting bees so I could focus on research and writing. Turns out that was a good idea because since starting beekeeping I've stopped working on the novel. But I digress...

During this time of research I was busy at home and my nephew left me a voice mail. He was very upset because there were lots and lots of bees at his house and he was scared of them.

Then my sister called to advise there were thousands of bees flying over her house and she didn't know what to do and the kids were scared. I told her it sounded like a swarm and that probably within a short period of time they would all gather in a mass and fly off. 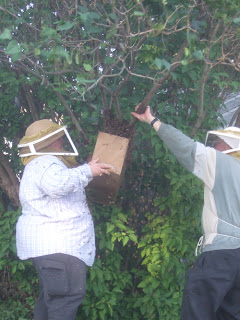 She called back an hour or so later and said that it happened just like I said it would. The bees formed a mass and then they all flew off all at once. She was thrilled at the experience.

Then in 2013 I got a call from my sister's neighbour. She had a swarm of bees in her tree and she'd googled swarms and came up with my web site and contact info. So she called. At the time she didn't know her neighbour was my sister.

Dad and I collected this swarm (see photos) and I blogged about it Prepare for Swarm Season. It turned out that those bees have been my best bees.

They build up fast and because of that they can swarm.  I found I'd have to keep an eye on them but they are survivors.

They have all the great traits a beekeeperis looking for:   They are friendly and produce a lot of honey, they're hygienic and are always strong. 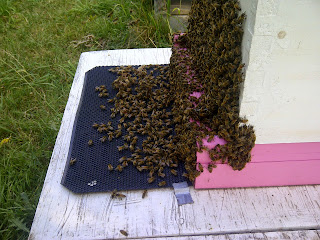 The only downside being their tendency to swarm but even that can turn for profit by producing nucs from the hive and selling them.

These bees have produced most of the hives in my yard.

The other day while I reflected on these bees and how they are so great I recalled the swarm my sister had over her house all those years ago. It was light a light bulb moment: That swarm I collected probably came from my sister's house She's probably had bees on her property all along and never knew it!

Then came the realization: My best bees came from my sister! 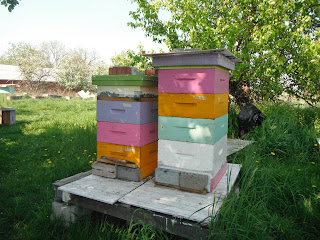 I wanted to confirm it so I went to her house and we had a look at the garage.

Sure enough we found a hole in the soffett of her garage right over the driveway - right where she had the bees swarming that day back in 2007.

I told her, she'd been a beekeeper all along and never knew it.

Just as a further note to this - my sister's next door neighbour on the other side, two members of that family are very allergic to bees. In all the time that bees were secreting living in my sister's garage there was never a stinging incident.
Posted by Bee Magic Chronicles for Kids at 12:37 AM No comments: