Fun Fact: How Bees "see" inside the hive 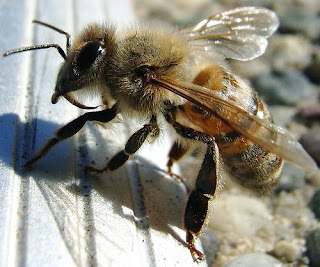 Fun Fact: When building combs in the darkness of the hive bees don't use visual sense.

They have cushions of sensory hairs at all their joints which are stimulated by gravity to move like a pendulum or lever relative to one another. This aids the bee to detect the in which direction the force of gravity acts.
(taken from Jurgen Tautz book The Buzz about Bees - this book has incredible macro photography of the bees).
Posted by Bee Magic Chronicles for Kids at 1:51 PM No comments:

Fun Fact: Do you know about Filling Stations? 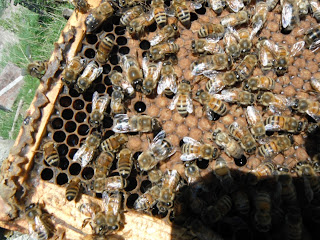 We looked at two types of chores bees do to heat up the wax and assist with keeping the brood temperature consistent.

When a bee dunks into a cell to warm up the adjacent cells, she burns off a tremendous amount of energy.

We look at how the bees will deliberately leave cells without brood in them and that these cells are used by heater bees.


The cells are also used as Filling Stations.  They're filled with nectar so that the heater bee, after exhausting all her resources to heat up the wax, can refuel herself. 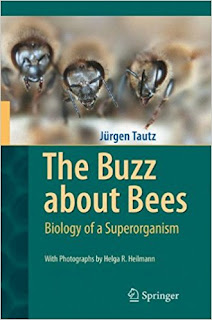 See photo with the shine of nectar in the empty cells.

Next time you're inspecting the brood area, look to see if you can find a blank cell with nectar in it.  If you see one, that's a Filling Station.

This info has been taken from a fabulous book called The Buzz About Bees, Biology of a Superorganism.  It's expensive to buy but so worth it from what you can learn.  I haven't found this info in any other book.  The Buzz About Bees
Posted by Bee Magic Chronicles for Kids at 12:41 PM 2 comments: 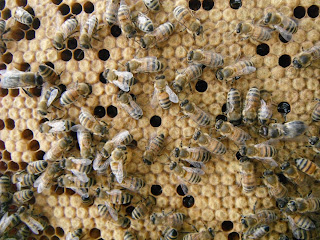 This is deliberate. Heater bees who are hot from warming up will dunk their bodies into these empty cells and rapidly telescope their bodies for a period of time and then rest.

The pumping bee is heating up the wax and adjacent cells. Previously it was thought these empty cells were missed by the queen.
Posted by Bee Magic Chronicles for Kids at 10:04 AM No comments:

Fun Fact: Did you know about Heater Bees? 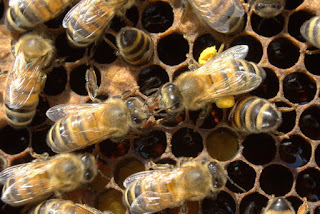 Fun Fact: Do you know what the largest organ in the hive is? It's the beeswax. Recent studies have shown that the bees communicate through the wax by vibrations that they make.
Wax also holds the warmth of bees' bodies and acts like an insulator. One chore for workers is to be a heater bee.

A bee may look like she's just standing on a capped cell doing nothing but if you looked at it with infrared you'll see she's pressing her thorax to the cell cap and she's contracting her flight muscles to transfer heat to the wax which will warm up the cell.

They can stay in this squatted position for as long as 30 minutes. The worker will have her antennae resting on the cell which is believed so she can check the temperature through the sensitive antennae.
Posted by Bee Magic Chronicles for Kids at 7:04 AM No comments:

Did you Know? Quick Facts 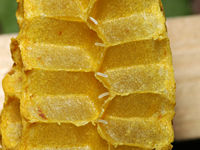 Did you know that bees deliberately build their honeycombs with a 15 degree slant?

This helps keep the honey from dripping out of the cells.

Did you know that when bees fly their bodies create static electricity?

This makes it much easier to collect pollen which attaches to their fur when they land on a flower. 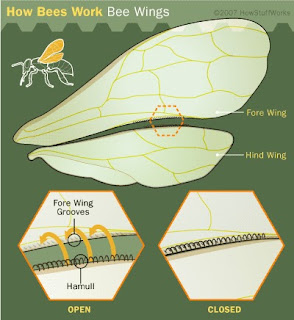 Did you know that bees have four wings?

And that they have tiny teeth on the inner edges of their wings.

When they want to fly they attach the zipper-like teeth together so that they have two large wings for flying.


Posted by Bee Magic Chronicles for Kids at 6:46 AM No comments: 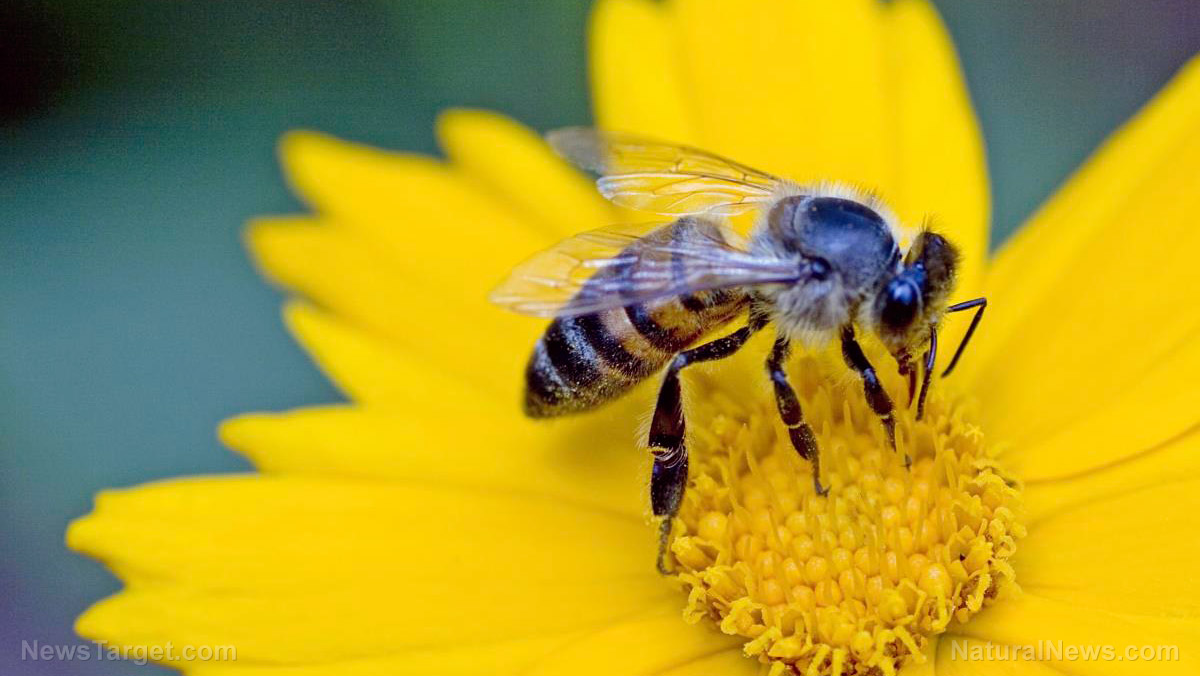 A really good article on a new discovery about how flowers attract bees.  I've pasted it below and the link to the story is at Discovery of blue halo on flowers

A “bat signal” for bees? Scientists have discovered that common garden flowers have an “invisible blue halo” for attracting bees    Monday, November 13, 2017 by: Janine Acero
(((Natural News) What was thought to be a disorder in petal surfaces of certain flowers turned out to be an ingenious adaptation to attract bumblebees which are usually found hanging around flowers with more blue and purple hues, scientists discovered.
The discovery came as a shock to the scientists when they found out, after some tests, that certain flowers have developed a way to attract bumblebees to their nectar by displaying a special glow that escapes the naked eye: an “invisible blue halo” caused by light being reflected on irregular petal surfaces. These nanostructures consist of microscopic ridges and grooves of varying sizes in height, width, and spacing.
Bees have a much broader range of color vision that enable them to see ultraviolet light. This draws them into flowers with blue pigment. Bumblebees have been known to favor flowers such as hydrangeas and delphiniums because of their blue and purple colors, but this set of bee-friendly plants are changing the pollination game.
Lead author Dr Edwige Moyroud, said: “We can’t distinguish between a yellow flower with a blue halo and one without – but our study found that bumblebees can.”
The scientists replicated the “invisible blue halo” through artificial surfaces, and surely enough, the light-manipulating surfaces attracted bumblebees foraging for nectar.
According to Professor Beverley Glover, director of Cambridge University’s botanic garden, “We had always assumed that the disorder we saw in our petal surfaces was just an accidental byproduct of life – that flowers couldn’t do any better.
“It came as a real surprise to discover that the disorder itself is what generates the important optical signal that allows bees to find the flowers more effectively. The disorder we see in petal nanostructures appears to have been harnessed by evolution and ends up aiding floral communication with bees.”
There has been no previous evidence of halo-producing petal ridges in the fossils of early angiosperms (flowering plants) but some examples of aura-generating petals were discovered among two major flowering groups that emerged around 100 million years ago during the age of the dinosaurs, which coincided with the evolution of bees. Some flower species today that can generate aura from their petals include Oenothera stricta (evening primrose), Ursinia speciosa (daisy), “Queen of the Night” (black tulip) and Hibiscus trionum (Venice Mallow or “Flower-of-an-Hour”).
“Our findings suggest the petal ridges that produce ‘blue halos’ evolved many times across different flower lineages, all converging on this optical signal for pollinators,” said Professor Glover.
The bees used the halos as a signal to distinguish which flowers contained nectar. With common flowering plants evolving to adapt to the bees’ ultraviolet-sensitive eyes, they ensure that the bees pollinate their flowers.
Bumblebees are one of the countless insects that are essential in the pollination of many flowering plants. Bees are considered as a  keystone species, meaning that their decline or absence in an ecosystem will bring about its collapse. (Related: More than 25,000 bumblebees fall from Oregon sky due to insecticide poisoning.)
Posted by Bee Magic Chronicles for Kids at 10:39 AM 4 comments: