Feed Them! A Mud Sucking Adventure 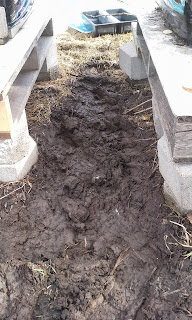 A couple weekends ago I went skating. Then I did gymnastics. Next I went swimming. Following that I did a mud pack.

Sounds like a weekend at a retreat right? Well, it wasn’t.

Recently we had a bee meeting and the advice given was to feed the bees even though there was still snow on the ground. I’d been thinking the same thing and so armed with this information I borrowed a toboggan from my sister. I made a decision to feed the bees honey instead of sugar water.

We have quite a bit of honey and I’ve been concerned about their health since they struggled last summer to produce. I figured honey would give them a good boost. I loaded the toboggan with rim spacers, smoker and honey pails. I had baggies to fill and the honey was still warm from being melted.

There was still some snow on the ground with many large, damp patches. When going over the snow my feet broke through down a foot or so to wet and watery ground below. And my leg was stuck.  While pulling desparately on my right leg it popped out, without my boot but then at the same instant my left leg broke through the icy snow right up to my knees and then as I went down my right leg went back into the hole.

Of course I fell backwards too.  So I laid there a minute on the icy snow and had a rest.  Eventually I was able to wiggle my legs out and stand up again.

The areas of the yard not covered in snow turned into mud holes that sucked the boots right off my feet. So with mud covered clothing and wet boots and socks I finally hiked into the yard.

The temperatures the last couple days had been about 10+ Celcius which we haven’t had for many weeks. I had 18 hives. The first day I was there it was colder so the bees weren’t flying, but the second day (wearing rubber boots this time) the bees were flying—at least from most of the hives.

Those hives where I didn’t see any activity did not look good. Six hives appeared to be dead. I pulled just a few frames and they were plugged with dead bees. Sad. This was the first time I’ve had losses after winter in five years of beekeeping. It was also the first time the bees had struggled all summer to keep queens alive and in the fall they had not been able to build up their supplies so I gave them back frames of honey we had that hadn't been extracted yet.

It was also the first season to have corn planted across the road.

The dip in the area in front of the hives had turned into a pond and as I put stepped on a bit of ice at the edge of the pond my foot slipped.  As my right leg slid into the water I desparately tried to stay on dry land.  I actually (painfully) did the splits.

Then I fell splat into the icy water.  It was somewhat refreshing.  My knees are so painful that all I had to kneel on was ice.  It was very painful but I managed to wiggle back a bit until I found a somewhat muddy spot where I could kneel and get my footing back.

So after this adventure I refused to go home.  I continued on and feed the bees the warmed honey.

I got warmer too as I worked and my clothes dried out.
Posted by Bee Magic Chronicles for Kids at 12:55 PM No comments: