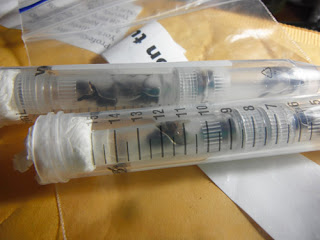 The Canadian Honey Council has funded a genomic study of the honeybee which will be conducted by York University.
Dr. Amro Zayed, PhD; Department of Biology, York University, and his students are conducting a study of the genetics of Canadian Honeybees.
They hope to collect one thousand worker bee specimens from across Canada and analyze the data the data in regards to genetic diversity and ancestry. The study  will be submitted to a peer reviewed journal, and the results posted to the Honey Council's website. - See more at: http://www.supersede.me/2013/09/collecting-bees-for-york-university.html#sthash.YBX1TioW.dpuf
Earlier in the year an invitation was emailed to beekeepers across Canada asking them if they'd be interested in participating in the survey.
They'd be required to submit dead bees to York University.
So since all I had to do was submit dead bees, I signed up to participate in the survey. 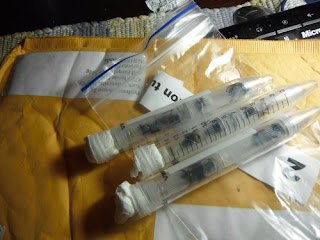 A few weeks later a padded envelope arrived.  Inside were plastic test tubes filled with small glass vials.
Inside the vials was alcohol.
At that moment I was starting to feel like I might have made a mistake about the 'just collect dead bees' part.
On reading the instructions it turned out that I would be required to insert live bees into the alcohol.
I just don't like killing bees.  I counted the containers.  I'd have to collect 24 bees to fill the vials.  And it was for science.
So I picked up live bees and carefully stuck them into the vials, all the while apologizing and thanking them for their contribution to science.
On the accompanying form I wrote what breed of queens I had in the hives where I collected the bees from.
The challenge this year was that my bees were all requeening constantly all summer.  So they may have started off the season with a particular queen but by the end of the season they all had another queen entirely.
My bees are primarily Buckfast bees but of course my queens mate with any available drones and I have no control over their selection.  Ontario is well known for working mostly with Buckfast bees (a strain of bees developed by Brother Adam in England - more info on him in a future blog).
I mailed off my samples in October 2013.  It'll probably bee a while until the results are released but I'll publish the info on this blog once I get it.
Posted by Bee Magic Chronicles for Kids at 9:01 PM No comments:

Bees Robbing out Cappings on the Robbing Table 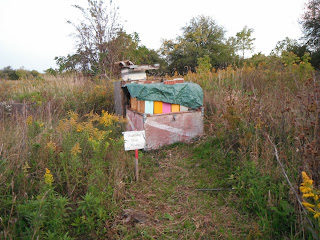 Each year we learn more about being better beekeepers. We learn how to harm less bees while working in the yard, how to save time, and how to do more with less effort.

The robbing table is about 50' away from the hives.  This helps to keep the robbing frenzy away from the area where all the hives are. My table is a large box about 2 1/2 feet high.  So far no raccoons have climbed up there to cause problems.

In the past when laying out sticky combs on the robbing table, I didn't have the bowl covered well enough. When it rained it got water in it. And you guess correctly that I discovered quite a few drowned bees. 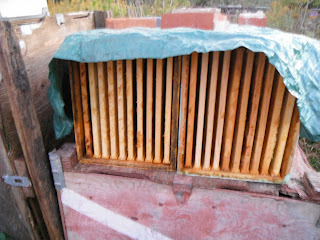 Those are moments when it's too late to take it back and you feel bad. The best thing to do then is to learn from it and make changes so you do it better next time.

I use outer covers and my plastic political signs to create a roof over everything.  Then I cover it all with a ground cover and plastic sheeting.

One thing I've done the last couple years because I thought it was best is to spread the sticky combs out on a flat surface. 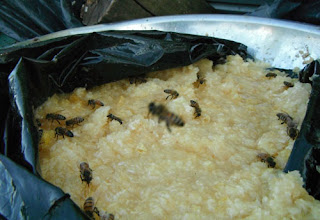 I'd come back a week later and find all the combs as dry as a bone. Those bees sure are dutiful workers when there's honey to be cleaned up.

This year Dad (who does all the extracting) put the drained but very sticky combs into either small pails or plastic bags (double bagged).

I found it worked really well to set the plastic bag or pail out under the tarp. Believe it or not the bees would go at this mass of sticky combs and get them entirely clean right to the bottom.

They'd drill down through the combs, cleaning and drying them off as they go. They'd get to the bottom and lick every last bit of honey off those flakes of wax.

Spreading them out is fine but if you're in a pinch, just give the combs to the bees. They know what to do.
Posted by Bee Magic Chronicles for Kids at 9:05 AM No comments: