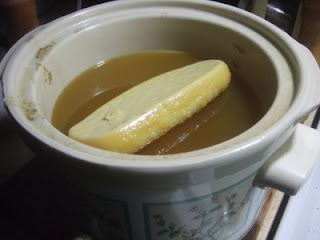 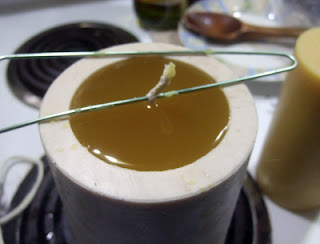 Once again it's our annual celebration of Earth Day.


It's also a perfect occasion to put those beeswax candles to use.

Combs are first heated in a crock pot until they melt.  The debris falls to the bottom so I carefully scoop close the the surface with a glass pitcher.

Then I pour into the waiting silicon molds.  The candle wick comes from a hole in the bottom, fed threw with a crochet hook and pulled to the top (which becomes the bottom of the candle).


Bobby pins or in my case, knitting accessories, serve to hold the wick straight and center while the wax cools.


The next day I'll tip the candles out. 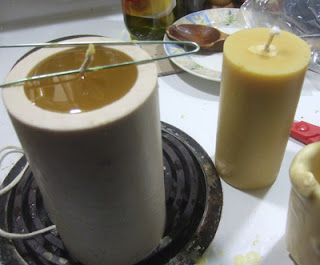 Posted by Bee Magic Chronicles for Kids at 7:11 PM No comments:

They have a Queen ... Sorta, Kinda, Maybe 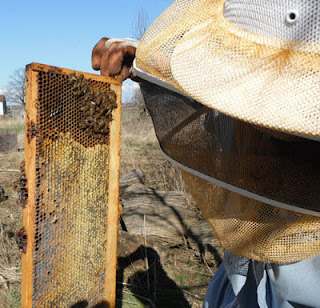 The story is much like the small surprise swarm that showed up last year. They moved into a super. There were a few hundred of them - a small struggling hive with no queen, but someone was laying eggs.

They had a laying worker (drone layer). We could tell because of the bullet-like cappings.

With Hive #1 I reported that there were three frames with a small cluster of bees.  I spotted eggs in many cells. Some cells had more than one egg.  That's a no-no.

[Photo - Janice assisting with the inspection] 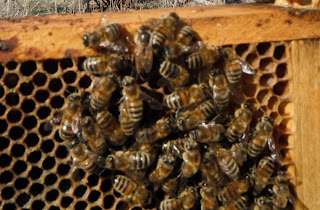 You know what that can mean: A Laying Worker.  There was clearly no queen in sight.

[Photo - see the queen at the top of the frame]
Fast forward one week later. I show the hive to my beekeeping friend Janice. She confirms that she saw a couple eggs in a couple cells. Then while I’m holding the frame closely I see Her.


She’s tiny and not much bigger than the workers. Was she there all along and I didn't see her?  She has the shiny black hairless back and brown legs that are customary with queens. 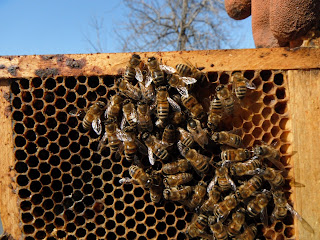 So now the question is, is she really a queen or is she a laying worker that is morphing into a queen? Can they do that or have I watched too many science fiction movies lately?

I have read that new inexperienced queens can lay more than one egg in a cell. It’s just that the workers fix things by moving the eggs.

If she’s a new queen is she mated? Are there even drones available (with mature sperm) so early in spring?

Only time will answer them.
Posted by Bee Magic Chronicles for Kids at 12:10 AM 2 comments: 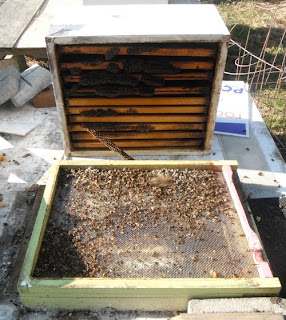 Winter was incredibly mild and we seemed to have missed spring and gone straight into summer with temps around 22 degrees C. So, off with the winter wraps.

In the fall I had six hives, five strong and one that had been battling heavy mite loads all summer.

On approaching the bee yard it was immediately evident that five of the hives were doing very well. And one was not.


Hundreds of bees were flying in front of the first five hives but Hive #1 only had about three lonely bees on the stoop. I was saddened but not surprised. The hive had problems last summer when it went queenless, with no brood or eggs. I gave them a queen cell from another hive and they mostly recovered but their numbers didn't get up to where they should have been.

The hive had been plagued with heavy mite loads. I treated in spring and fall with formic acid but still there were still far too many mites. I knew this would dangerously weaken the hive. 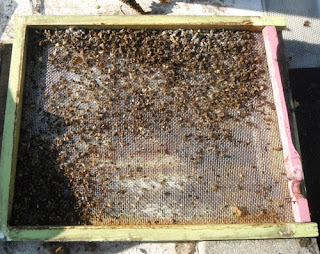 In the fall many baby bees had deformed wings so the new workers born couldn't be productive.


Last fall I also noticed tiny moisture droplets inside the hive and I kept blaming my hive top feeder thinking it was leaking. I tested the feeder at home and it didn't leak. It was a mystery. The moisture was like a fine mist. We'd had a lot of rain in fall so I was left confused where it came from. Was it condensation? There was a top vent open to release moisture.


Yesterday I took the hive apart. The deep was empty with a few bees standing on the combs--dead. There were many bees in capped cells, partly exposed but not hatched--and dead.

The bottom board was covered with bee parts. A sad scene.

The top exit/ventilation hole had about 2 handfuls of bees pooled where the wrap was snug against the hive, just under the vent--all dead. 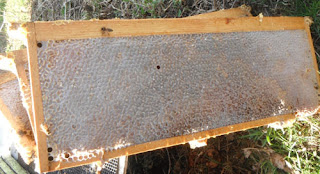 There were live bees on three frames in the medium super and they were clustered over cells of eggs. I didn't see any larvae or a queen. There was one egg in each cell at the bottom--so it may take a few days to determine if they really do have a queen or if it's a drone layer.

The super was heavy with capped honey but the surface of the cappings had a fine layer of a blue coloured mold. This I'm presuming is because of the mist/moisture from the fall. 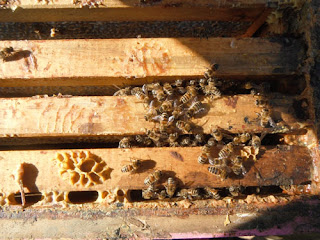 I took away the deep, leaving them in a super with a few frames.  I gave them a new bottom board, a pollen patty and some sugar water and repositioned the hive so it had more of a slant for water drainage. Their entrance reducer is set to the smallest setting.

Later this week I'll give them a frame of brood from one of my strong hives. I want to see if I can bring these bees back.

In hindsight maybe the hive was sealed up too much for the mild winter we had.  With bees too weak to deal with the moisture they couldn't maintain their combs.  Then mold got a chance to set in.

Kudos to the determined little workers who are hanging on. I'll do what I can to help them.

Posted by Bee Magic Chronicles for Kids at 10:27 AM 4 comments:

You'll Heart this one 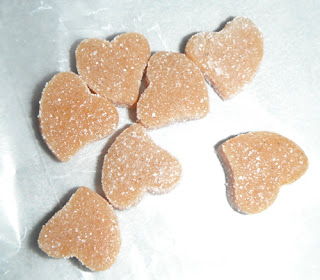 They're called Orange Salted Caramels and they are good!

This is a continuation of the fermented honey story.

My beekeeping friend Janice gave a jar to a lady who likes to bake.

This is what she came up with.

This combination of salty and sweet is the perfect treat.  And no taste of fermentation at all.

Thanks go to Meaganne.  Her recipe is below:

Prepare your pan by greasing it with butter then lining the bottom with parchment paper.  Do not use wax paper because the caramel will stick.

Place the milk, heavy cream and 1 vanilla bean (split down the center but beans still inside the pod) in a medium saucepan and bring to a boil.  Remove from heat and allow to sit for 30 minutes.  Strain out and discard the vanilla bean pod.  Measure 2 cups of the liquid.

Combine in a deep saucepan 2 cups of above liquid, 1 vanilla bean (use only the stuff inside the pod) butter, honey, sugar, juice/zest from the orange.  Do not combine the vanilla extract and the salt.

Cook over medium heat, stirring.  Use a pastry brush dipped in water and brush down any sugar that has crept up the sides of the pan.  When the mixture reaches a "hard ball temperature" (250) immediately remove from the heat and stir in the vanilla and salt.

Pour the mixture onto the prepared pan and cool completely in the refrigerator until firm.

Once hardened cut into desired portions - use a cookie cutter.  You may need to let the caramel sit at room temperature to cut through it.  Dip the cookie cutter into sugar then drop the cut caramel into a bowl of sugar and toss to coat it.

Many thanks Meaganne for these sweet treats.

Posted by Bee Magic Chronicles for Kids at 12:00 AM No comments:

What a Difference a Day Can Make 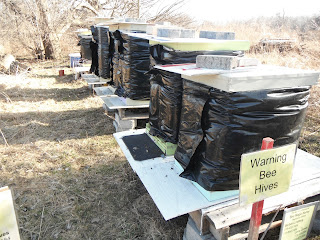 Yesterday it was cold and no bees were flying.  Today was very different.

The sky was mostly cloudless and the sun was quite warm, almost hot. People were out in their gardens and teens were walking around in t-shirts—well they do that in winter too but this time it at least made sense.

I just had to go back to the bee yard. I wanted to see if all my hives had made it through the winter. A fellow beekeeper told me he had already opened his hives. I could have done that too during a few warm days we’d had here and there but there’s no need to rush I think.


I could see the bees in the air as soon as I arrived. That’s always a good sign. 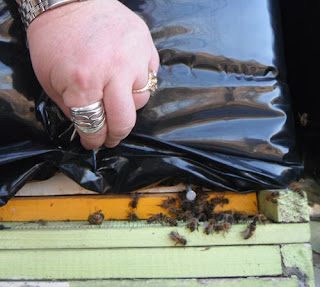 Many bees were flying—doing orientation flights in front of their hives. Every hive was busy, except one.

If I had to guess which hive might have trouble getting through to winter it’d be that one. There were some bees out front but only a few.

I saw several bees on the ground in front, unable to fly. On inspection I noticed they had gloop on their wings, making them too heavy too fly properly. I picked up these bees and using water and a Kleenex I cleaned the gunk off their wings. Would you believe if you do this gently enough they’ll actually lift up their wings. Then they start to clean themselves. It’s as if they know you’re cleaning them. 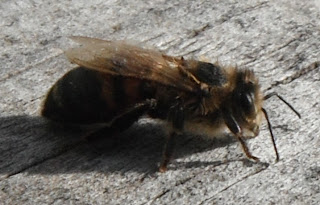 Once their wings were clean I set them down in the sunshine. They did their cleaning ritual and later I saw them lift their wings to the sun to finish drying them off. In time they flew home. I’m pretty sure the gunk is Nosema. I didn’t leave any pollen patties in the hive so I don’t think it was that.

[photo - this gal after her Kleenex and water bath].

At least this hive is alive. And if I remember last year, this hive may be much more active inside than outside. It wouldn’t surprise me to find on inspection that they’re doing fine. Time will certainly tell either way.

I hear temperatures on going to be up this week. My thoughts turn now to when to start feeding and medicating, especially for Nosema, and those darn Varroa Mites.
Posted by Bee Magic Chronicles for Kids at 2:17 AM 1 comment: 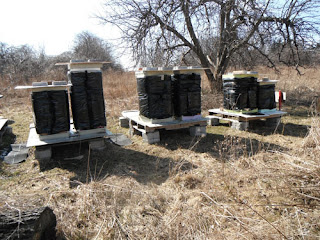 Time to get back into the swing.  Time to turn the attention off of other matters.  Time to think about the bees.

On today's visit to the bee yard it was a beautiful day, sunny, windy but quite cold.  Temperatures were around 1 with a wind chill that made me glad I wore a hat.

The bee yard looked very much the same today as it did when I was last there in the fall.  There were small piles of dead bees out front, as expected.  I swept away.

No bees were flying but because of the cold I hadn't expected to see them.  I wish I had come out on some of the sunnier days were had when temperatures were much warmer.  Luck would have it that I wasn't available on those days.

At home I have woodenware that I haven't nailed together yet.  In the kitchen sit buckets of wax waiting for me to make candles.

Oh yes, it's time all right.  Time to consider the bees.
Posted by Bee Magic Chronicles for Kids at 12:52 AM No comments: