Here's a copy of an email received today from our Tech Transfer Team who work for the Ontario Bee Association (OBA):

Small hive beetle (Aethina tumida) has been confirmed in Southern Ontario.
It was first discovered on Sept 8, 2010 and confirmed this week by Ag Canada. The Canadian Food Inspection Agency has been alerted of the find. Small Hive Beetle is an immediate notifiable disease that must be reported to the Canadian Food Inspection Agency (CFIA) upon official verification. The CFIA has made every indication that this is a provincial matter and the responsibility of the province to address this issue.

The apiculture program, through the Ontario Ministry of Agriculture Food and Rural Affairs, is conducting inspection and surveillance for Small Hive Beetle in Ontario to determine the extent of SHB distribution. An identification guide will be available in the near future.

Further information regarding Small Hive Beetle will be available in the next issue of the Ontario Bee Journal."
Posted by Bee Magic Chronicles for Kids at 11:06 PM 3 comments: 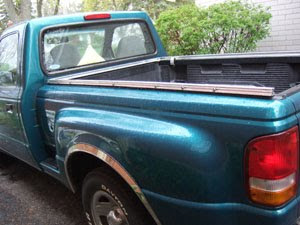 We weren’t into beekeeping when we got the truck, but it sure has turned into a real blessing. It was time to harvest our fall honey. Dad and I went in two vehicles and met at the bee yard.

The bees were not a problem at all and we really didn’t even need smoke. The problem was our lack of foresight.

The first mistake was not actually counting how many supers we were taking off. It turned out that there wasn’t enough room in the truck for them all, due to the storage bin in the back. By the time we realized that, the supers were all sitting in front of the bin, making it really difficult to get to it to move it.

We started loading supers into Dad’s van instead, cramming them into every available space. Just imagine the passenger seat, sticky with honey…

What we didn’t notice was that one cover on a super was not sitting down flush with the edge. By the time we had finished taking the rest of the honey and we looked at the truck we realized our mistake.

Bees were flying all over the back of the truck, robbing the box. We then had to remove each frame again, and brush it off again, and put them into a fresh super. We managed this successfully. But the bees wouldn’t leave the truck. 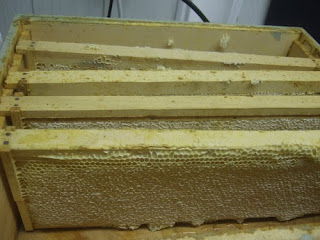 Smoke did not dissuade them either. I ended up pulling away with bees swarming the back of the truck. Only a few flew away.

In the rear view mirror I could see the driver behind, his eyes open wide as he watched my bee laden truck. I pulled over at a gas station. I wanted to sit a minute to give the bees a chance to leave and fly home.

“Go home, you naughty bees,” I scolded them. Many listened and did. Many others did not.

All the way home every time I glanced up I saw bees flying at the back of the truck. Once home, I could see I still had a few left. Finally taking the hint to leave, the workers flew up, did a circle in the air to orient themselves and then headed off straight northeast, as the crow or—I should say—the bee flies.

We had robbed them and I guess they wanted to rob us back. I can’t say I blame them either.
Posted by Bee Magic Chronicles for Kids at 6:00 PM 1 comment: 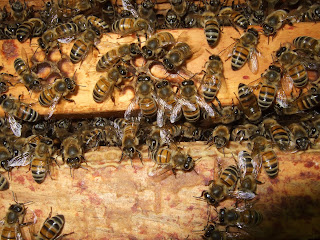 There are few things that are better teachers about how to keep bees than the bees themselves.

They can certainly let you know when you’re not doing things right.

In early summer, the weeds in front of the hives had grown considerably to the point that it was time to cut them down.

Dad brought his weed whacker to do the job. I wasn’t sure how the bees would behave. I had him put on the full heavy bee jacket instead of the shirt and veil that we normally wear.

The bees didn’t seem to mind the noise or movement and they didn’t complain at all.

I think that’s the beekeepers’ folly. We get complacent and we forget about the stories we’ve heard about what has happened to others.

By the end of summer the weeds had grown back. Dad once again brought his weed whacker. This time he wore his long sleeved shirt and veil. I was remembering how calm the bees were last time and so I was at the back of the hives recharging sticky boards.

Suddenly bees were flying back at me and buzzing angrily. I looked up and I could see that tiny pieces of grass were flying at the bees like shrapnel. I saw our mistake then. Because it was cooler weather, the bees were clustered around the stoop.

The whacker was spitting these bits at high speed and they were pinging off the bees. Of course they weren’t happy about it. I could see they were circling Dad by that point with real purpose.

“Stop,” I said. “You’re hurting the bees.” I pointed to the bees who were staggering around on the landing platform. By that time they were buzzing my head too, and I wasn’t wearing a veil. We both moved back to the truck.

Then Dad made an announcement: “I think I’ve got a bee up my pant leg.”
“Well, you’ll get stung,” I said. It’d happened to me once when shaking a lot of bees.

I guess that wasn’t acceptable to him because the next thing I saw were his pants in a puddle around his ankles. All I could see was bee, after bee, after bee, flying out of them. How did so many of them get up his pant legs, I wondered? He did get stung too, but only once, on the leg.

Let’s just say that we learned not to be so complacent after that and when we returned to harvest our honey a few days later we both had our socks up over our pant legs.

For the honey harvest, the bees were extraordinarily calm and we had no problems at all.

It was almost enough to make us get complacent again.
Posted by Bee Magic Chronicles for Kids at 9:46 PM 3 comments: