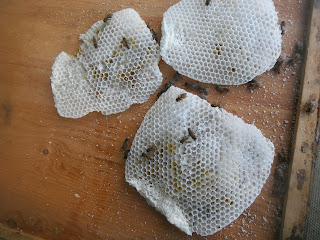 I do enjoy a swarm call that comes when I've just finished wrapping up my work on the hives. I'm available and already wearing my bee gear. I got a call via my web site in mid July. There was a swarm in a subdivision in the southwest end of the city..

Or at least it was a swarm but they had found a home. In a barrel.

The bee scouts had found a medium/small sized barrel sitting outside on a deck.  It was being used as a plant holder and it had a perfect cork sized hole in its side. Not only that, the barrel was 1" thick, giving great R factor and it was located under the soffit of the house, providing warm from the bricks and protection from the rain.   Bees are so clever they never case to amaze me. 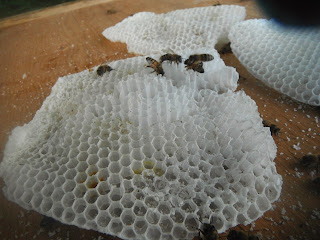 There was even a little pond a couple feet away providing a source of water. Clever bees. The bottom of the barrel was open, resting on the wooden slats of the deck. When I heard barrel over the phone I was thinking pretty large but this barrel was cask sized and quite manageable.

I picked up the barrel and when turning it upside down I could see about 4 or 5 medium pancake sized combs which the bees had created. I could guess the bees had probably been there for a few days to a week. I placed a bottom board and deep down next to the barrel and then tipping it upside down I shook the bees out. As usual, many bees went into the deep (it had frames) and many went into the air. 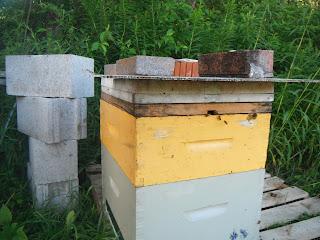 When this happens the bees will continue to go back to their original location so I then placed the deep as close to their original spot as I could. The slats in the deck boards confounded the bees when walking on the boards so I used a few leaves to create a bridge so they could walk back and forth.

The homeowners stayed inside most of the time and took photos through the patio window. But they were brave enough to come out and look. 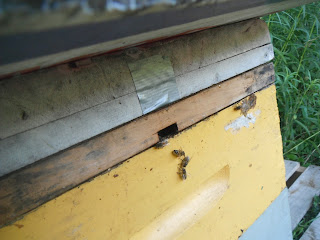 I explained how the cloud of bees in the air will slowing come lower and lower when they smell their queen in the hive and that within about 30 minutes or so most of the bees would be inside the hive.

And it happened just like that. But I'm not one to leave any bees behind so I left the hive there until after dark. I returned and picked up the hive, and the pieces of comb that had broken off but they had honey in them so I took them too so I could give them back to the hive.

I set the hive up on a new platform at the Heeman's bee yard. On top of the hive I set another inner cover on top of the first one and set the pancake sized combs on that.  The bees could travel into it to rob out the honey and wax if they desired. And they did--all the honey and the wax.

The hive did very well all summer and even though it was a late swarm (they said a July swarm "ain't worth a fly") they're worth a lot to me to replace losses. I gave them some frames of drawn combs with honey to give them a boost and also pollen patties.

The rest they took care of themselves.
Posted by Bee Magic Chronicles for Kids at 12:03 AM No comments:

I got a buzz of bumblebees 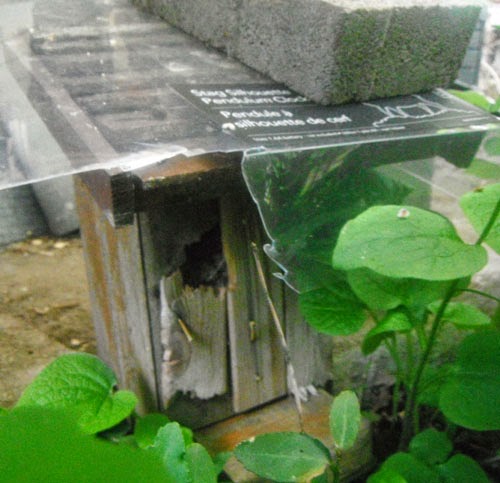 I heard that bumble bees like their nests on or low to the ground and that the best way to make them happy is to take a mouse nest and put it in a box with a small hole.
At home I had a mouse nest in my compost bin outside that I left alone so I could use it when I was ready.
I took a wooden unpainted bird house and put half the mouse nest in it.  I set it on the ground next to a pillar and held by a brick on top.
It was situated under the soffit of my outside patio so it was mostly out of the rain. All the advice online (Y-tube is best) on raising bumble bees says to use upholstery stuffing--the cotton, not polyurethane which catches on their feet. 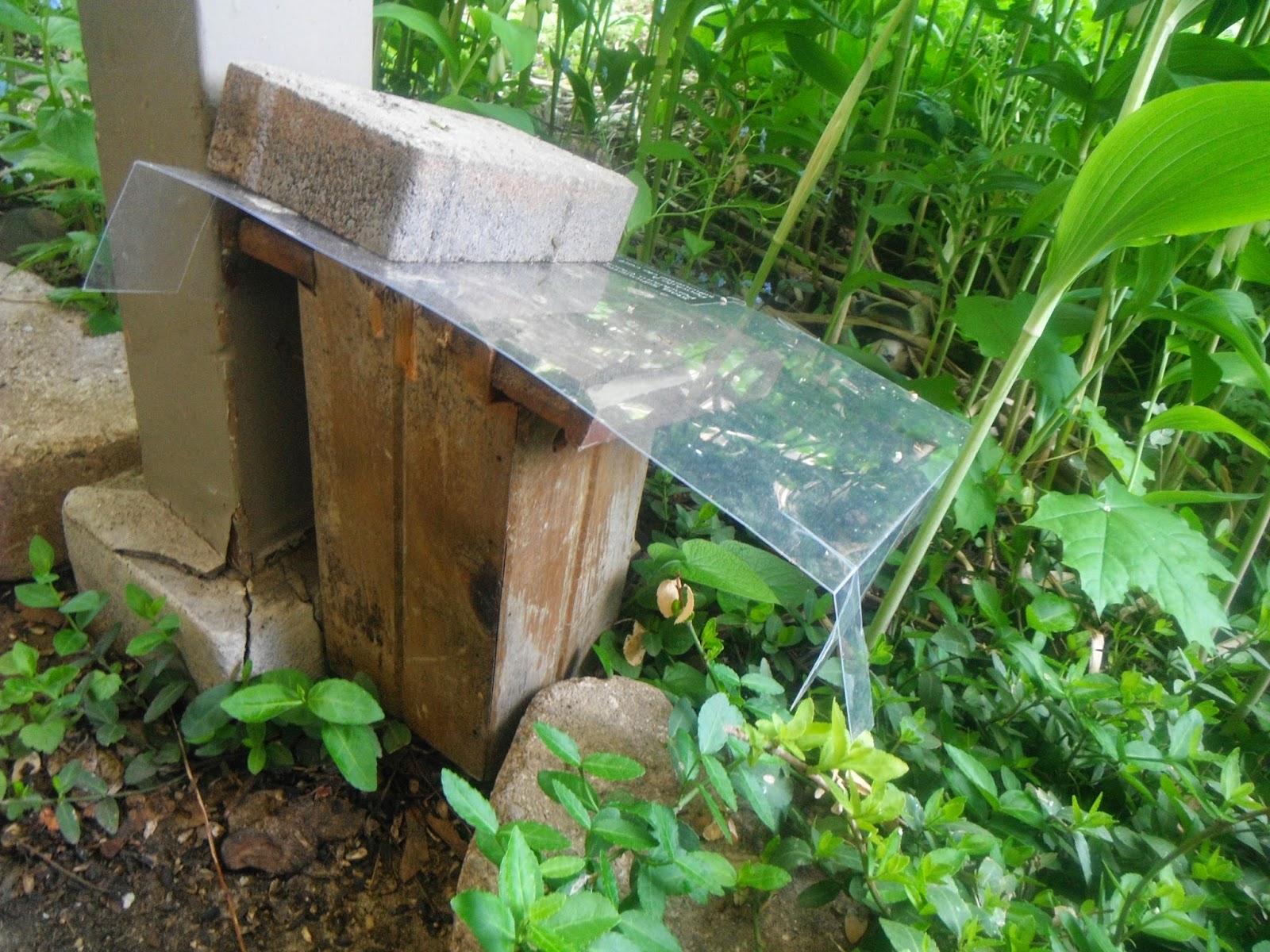 I watched a video on nurturing-nature that showed a queen looking for a nest.

She focused strongly on a dead mouse corpse so it showed how she was scenting on mice looking for an old mouse nest she can use.
I was so happy when within two weeks a bumblebee queen had moved in. We've had a ton of rain lately so I put a piece of plastic on the bird house roof to keep the rain out. When I did this I could hear lots of buzzing inside so even though it was cold and wet outside there was a warm buzz on the inside.
A few days later it was still cool but not raining and I sat outside for an hour or so and watched workers coming and going from the box to my back yard flowers  I was so thrilled to have provided a home for bumble bees.
About a week later I went out to check on the nest and sadly found the bird house on it's side and the inside was empty.  A skunk attack I think.  I felt so bad.  I could only hope the bees were able to fly away.
Hard lesson learned that a bumblebee nest on or close to the ground must be secured so that skunks or maybe raccoons cannot tip it over or interfere with it too much.
Posted by Bee Magic Chronicles for Kids at 8:57 PM No comments: