Fermented Honey in my Tummy 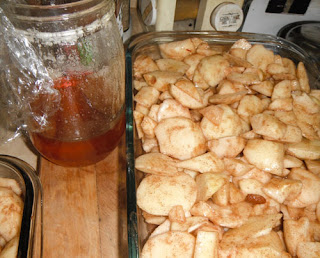 Two posts ago I wrote about how my absent mindedness led to three partly filled pails of honey fermenting.  I knew the honey was not all cured and intended to check it for it's water content and then I forgot.

[Photo - a jar of cooked honey and cinnamon covered apples]

The result was fermented honey.  So I put two pails in the freezer where they'd sit and wait until I decided what to do with them.  The third I thought I'd experiment with.

I cooked it down into a thick sweet syrup--the idea here was to save the honey for personal consumption, not to sell it.

After boiling it down the taste wasn't bad but there was still a fruity flavour to it.  In my estimation it was edible but not tasty enough to put in my cup of tea.

But put into baking I hoped it'd do well and hide the slight fermentation flavour.

I made Apple Crisp.  I admit that I don't cook much.  I made regular traditional apple crisp first using white and brown sugar.  It turned out great and now I had a taste comparison.

Next I used the same recipe but substituted honey for the white sugar.

I am very pleased to report it turned out fabulously!  I can breathe a sigh of relief now that I know the honey can be put to use. 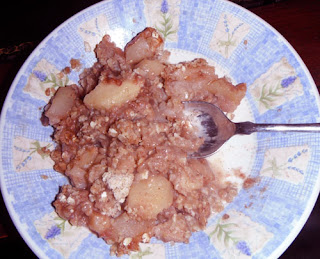 10 cups all purpose apples, peeled and sliced
1 cup honey (used instead of 1 cup of white sugar)

- Mostly fill a baking dish with the sliced apples. Mix the honey, flour, water and cinnamon together and spoon over the apples. (Additional water can be added if the honey is very thick and less if its very runny).

Serve warm with ice cream or a splash of milk. It’s good cold too.

And finally, don't forget to buy a refractometer so you can check your honey.

Posted by Bee Magic Chronicles for Kids at 12:50 AM 2 comments: 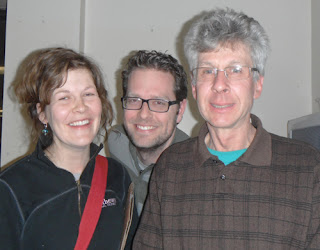 I think one of the best parts of joining your local bee club is how you spend your break time, drinking coffee and talking to fellow beekeepers.


That's where the bee advice flows a-plenty and the real stories come out.

A local person found a fellow beekeeper through his web site and called.  He wanted to make a purchase.  Of dead bees.

So my fellow beekeeper lifted up the deep and scooped up a cup or so of dead bees.  He had to set a price so he charged $5.00.

The happy customer left with their dead bees.

Are wondering what on earth they will do with dead bees?  They put them in water and cook them.  Then they strain the body parts out, saving the liquid.  Then they add alcohol to the water.

Apparently it's very a common health recipe that Polish and Russian people drink.

There you go--another product line a beekeeper can offer for sale.  So don't hesitate to join your local bee club and get educated!
Posted by Bee Magic Chronicles for Kids at 11:05 PM 4 comments: 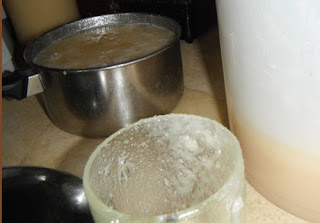 This is a sad tale about an absent minded beekeeper and a couple pails of honey.

It was the end of the season (late August).  Those honey supers all needed to come off.  Many frames were not fully capped, others had mostly cured honey and some had nectar.  Because I needed to put treatments on I had to take them all off the hives.


We extracted the honey, doing our best to keep the more runny honey separate.  My plan was to check it later to see if it was cured enough so it wouldn't ferment. 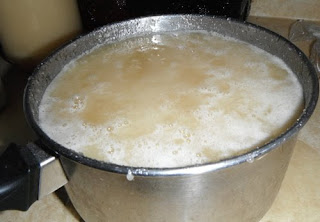 All went well except for the last part.  At the end of the season I had so many other things to do that I got really busy. 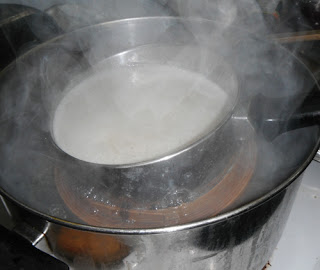 A couple months went by. I was collecting a pail so I could make creamed honey. It was then I discovered my mistake. When I took off the lid I could smell fermentation. And the honey tasted a little fruity.

The surface of the pail was very liquidy - the water on top and crystallized honey below. I felt sick about it. Three pails were affected. Thank God they weren't all completely full.

Two are in the freezer which will hold them in stasis. I'm not sure what can be done with them. I'm hoping they can be used for mead. (I can't stand waste and I don't think I could throw it out). 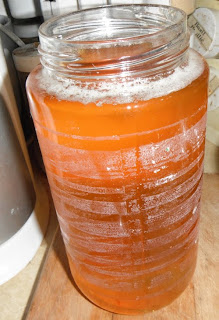 [Photo - water steams will the honey heats in a double boiler].

One pail I thought I would cook to see if that would improve the flavour. It certainly wouldn't be used for sale but hopefully it could be used for baking.

I created a double boiler with water in a pot and a bamboo steamer. Then another pot with the honey in it was set in. The water steamed away and I cooked the honey slowly for an hour or so. It did thicken and the flavour did improve. I wouldn't use it to sweeten my tea but I think it'll be okay in baking, like muffins or banana bread. I'll have to report back on that.

This has been hard to write about because I'm so mad at myself. The bees worked so hard to make it so how could I forget to check it?  Ihave to accept that it just happened, learn from it and move on.

I will get a refractometer so I can be sure the honey's moisture content is below 18%. [Photo - honey darkens when heated at higher temperatures].

So please learn from my mistake and remember to check your honey for it's water content before you set those jars on the shelf and move on to life's busy non-bee related things.
Posted by Bee Magic Chronicles for Kids at 11:12 PM No comments: