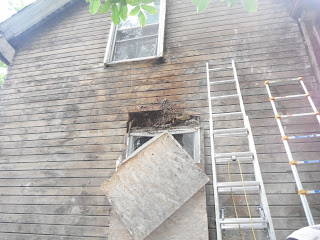 There are few things nicer than a well built brick home.  Cira 1830's, this once yellow brick home belonged to the Kernohan family.

For about 75 years they ran an apple farm in north east London.  For years our family would buy bushels of apples from them.  I'll always remember the awesome taste of a cold crisp Mac apple.

After a few generations part of the land was sold to the city to make room for a highway stretching from north to south London.  And the apple farm was eventually sold. 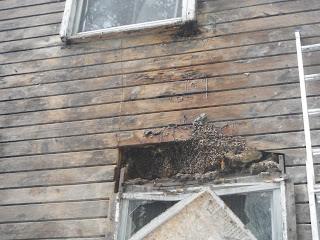 Now the outbuildings on the land have been torn down.  They started on the house this week by first removing the bricks.

And guess what they found?

A pretty perfect warm dry place to have a hive, snuggled right between the studs in the walls.

That's where we come into the story.

We got called to see if we could help remove the bees.

I'd never done a house removal before but we were game to try.  I didn't want more hives so I called on some friends to offer to take the bees.  So Vincent offered to take the bees and I said I'd help. 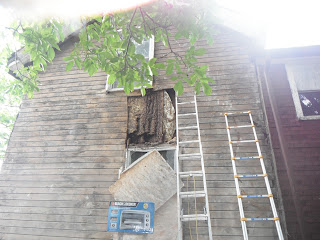 The bees' main entrance was from a smallish hole at the bottom corner of the second storey window.  The bottom of the hive/combs when exposed were at the top of the main floor window.

This was a large hive that had been there for quite some time.  The brood combs in the centre were dark brown with age.  The four foot honey combs on the left were older and golden coloured whereas the honey combs on the right were newer fresh white combs.

Vincent started by cutting the boards on either side of the window and pulling them off.  Then he began by cutting the combs and laying the pieces in a cardboard box.

We put the pieces into a hive, bracing them as best we could between frames.

Several of the brood combs fit very well into blank frames.  We tied them into place in the frames and set them in the box. 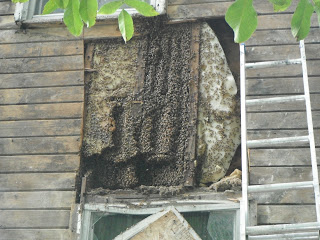 The honey combs were 4' long and about 3" wide or more.  These bees had been busy.

It was difficult to sweep the bees into our box.  They weren't clustered together in a mass like a swarm is.  Instead they were spread out all over their combs.  This is where the custom made bee vacuum would come in handy.

But we didn't have one so we couldn't get them all.

We left the hive box out until dark and then closed the bees in for the night.  Vincent would pick them up early the following morning and take them to his place.

It was an interesting experience.  I can see how if anyone is thinking of doing home or building removals they'll need to have a vacuum.

One final note, that house was finely and well built.  It is sad to see that it'll be torn down.
Posted by Bee Magic Chronicles for Kids at 3:52 PM No comments:

Labels: bees in exterior wall of home, removing a bee hive from the walls of a house


As you may know, the Ontario Beekeeper's Association has been working hard to have the neonicotinoid pesticides responsible for these losses removed from use in Ontario. As part of their strategy, the OBA has developed the attached petition requesting the Premier of Ontario to follow the lead of the European Union and ban neonicotinoid pesticides.


I am asking you to sign this petition by clicking here  to add your voice to the beekeepers, farmers, environmentalists, scientists, and citizens who want to see an end to this toxic contamination of our pollinators,  wildlife, water systems and land.


Please circulate this email to all your friends and contacts, or 'cut and paste' this link into your own message:  http://chn.ge/11J53Jc . If you have a website, blog or Facebook page, or if you Tweet, please share the petition on your sites.


Together we can protect our bees.
Posted by Bee Magic Chronicles for Kids at 12:04 AM No comments:

Two Messages from the OBA: Ontario and Quebec ally against neonicotinoid pesticides

Below are two messages from the Ontario Bee Association (OBA):

The OBA has been in discussion over the past few weeks with the Ontario Government about their plan to establish a cross-industry working group to address the issues of bee mortalities. OBA President, Dan Davidson has been invited onto the committee and has been quoted in the government's press release which reads as follows:

" Ontario is bringing together a group of experts to provide advice on how to prevent bee mortalities. The Bee Health Working Group will be comprised of beekeepers, farmers, agribusiness representatives, scientists, and staff from both federal and provincial government agencies. Drawing on a broad range of expertise, the working group will provide recommendations on how to mitigate the potential risk to honey bees from exposure to neonicotinoid -- a pesticide used for corn and soybeans."

The OBA and the Federation des apiculteurs du Quebec have written to their respective Ministers of Agriculture and Environment to immediately ban neonicotinoid pesticides in field crops, and issued a joint press release. "It is time to stop poisoning our bees, our water and our soil", said Leo Buteau, President of the Federation. OMAF has confirmed that Premier Wynne will raise this issue at the Ministers of Agriculture meeting in Halifax on July 17th. We thank her for her leadership.

These additions more accurately reflect the current beekeeping reality, and will increase the protection offered to beekeepers in Ontario.

Thanks to PA Paul Kozak and the OBA board members and other beekeepers who worked diligently on this.
Posted by Bee Magic Chronicles for Kids at 11:18 PM 2 comments: 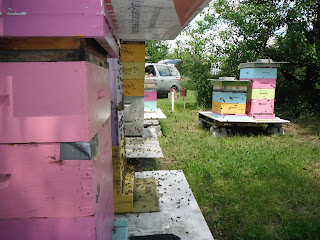 I think my problem is in part because of procrastination.  I always seem to be in the midst of dividing one hive when another one swarms.

The procrastination is that the hive I should have started on, the one that was overflowing with bees, seemed like a lot of work so I started on an easier one first.

Note to self:  Don't do this.  Do the super busy hive FIRST.

The strange thing was that as I heard the loud buzz--some refer to it as a roar--I knew even before I looked up that one of my hives was swarming.

A swarm looks different in the air than other types of flight that bees will do.

Orientation flights often take place around 3:00 in my yard.  That's when the house bees come out for some exercise and to practise flying.  Maybe to poop too.  The times change on which hive will come out for orientation and I noticed it's dependant on which hive is getting the hot afternoon sun.  As the sun moves across the yard and lights on the shady hive in a short period of time those bees will come out too.  The orientation flights are a back and forth flight that bees do, starting low on the hive and then moving up and over the hive.  Sometimes the bee will then fly off on a task or repeat the back and forth motion for a few more circuits and return into the hive. 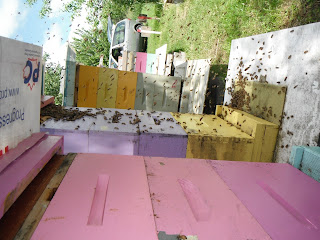 With swarming, chaos flying would be the best word to describe.  The bees are going in every direction in the air.  They circle in large loops, looking and watching for the queen.  They're probably relying more on smell than they are on sight.  You can tell when the queen has come out if you watch their bodies.  They will all begin to turn and face the same direction--whichever way the queen is going.  Then they head to where she's at.

On this day the bees found direction and started going to that pear tree (again) and at the spot about 25' up (again).  (What is it about that spot?  I think I'll cut the edges of those branches off--if I could reach them--to discourage them liking that spot).

While I was sitting there watching and thinking it'd be nice to have a miracle where the bees would land in a more convenient spot they suddenly turned and faced the opposite direction.

I watched as they faced the hive again and then miracle of all miracles they all returned to the hive.

Whew!  I guess that'd be a false swarm.

I immediately took the hive apart and did a split.  I could not locate a queen but found fully capped queen cells.  So in this case I did a walk away split by putting two cells in a nuc box which I sold and leaving the other queen cells in the hive.  The bees will work things out.
Posted by Bee Magic Chronicles for Kids at 10:13 PM No comments:

Labels: bees following the queen, bees swarming, how to tell if the bees are swarming, what bees fly like when swarming
Newer Posts Older Posts Home
Subscribe to: Posts (Atom)