All I want for Christmas is: A main floor honey house


Dad and I had been carrying our honey supers from the driveway down a flight of stairs to the basement. It’s a lot of heavy carrying. Sometimes we’d remove a few frames from a box to lighten it up a bit and other times we’d both take and end and carry it down together. Somehow no matter how many frames we’d remove those boxes would still feel really heavy.

The arms get tired after a few boxes and I was so nervous about falling forward down the stairs that I’d most often carry the supers down the stairs going down backwards. It actually worked well because if I was going to fall I’d fall forward into the stairs. 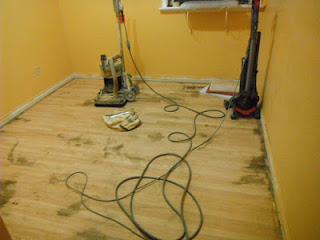 So I got to thinking about all this and how it’d be so very nice to have a main floor honey house. I did consider the garage for a bit. I could convert it or even close off part of it to create the honey house. I must say I’m the only family member that actually puts their vehicle in the garage—something I’m very proud of—considering the amount of organizing it took to accomplish. I didn’t want to put my truck out in the snow and hail AND I didn’t want to get gas fumes and exhaust around my honey. So I vetoed that. 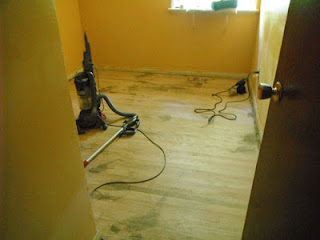 Next I considered a small bedroom that is nestled between the kitchen and the master bedroom. That room had always been a bit of a junk room. When the niece and nephew were younger I used it for sleep overs but over the years it mostly stored stuff that I couldn’t figure out where to put. I’d kept some rabbits in there and foster cats over the years so the hardwood had some wet damage from spilled water dishes, etc.

The floor was a mess but the room had possibilities. I figured the floor should be torn out and redone. I was costing that out and then realized the best option was to refinish the hardwood. Even that was expensive. So, being a brave soul I thought I’d look at U-Tube to see how floors are refinished. After an hour of watching the pro videos I was certain I could to this myself.

And I did. First I bought paint, a nice terracotta colour. I painted the ceiling a bright glossy white and then I did the walls. It was July and it was right in the middle of this project that the lay off letter came. One good thing was that I had a major project underway, as well as the bees to keep my busy.

I rented a floor sander from Home Depot and bought floor brushes and Urethane. I chose a red mahogany stain for the floor to help cover up the damaged areas.  I can’t tell you what a feeling of achievement I got from doing this project myself. All through it I didn’t tell Dad what I was doing. I wanted it to be a surprise. His job is to sell our honey and to do all the extracting. So it was him who’d spend hours and hours tucked into the corner of our basement extracting. Now he’d be able to do it on the main floor. 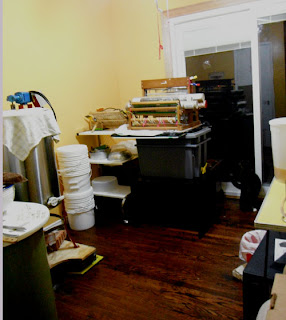 The final part was to add patio doors. This would be the most important part because now we could walk straight from the driveway to the doors, up three steps and right into the bee room. My brother was home from Australia for the month of August and he built the stairs for us.

The project was done just in time for our fall harvest of honey. I did the reveal to Dad and he was really happy with the change.

[Photo - ignore the small loom sitting on top of the gray uncapping tank].

Through the summer I had increased from six to fifteen hives so we had a lot of work to do. We averaged from 100 to 125+ lbs of honey per hive, but more on that later.

2012 has been a good honey year for us.  We were fortunate not to have bee kills from corn planting like many other beekeepers did.  The summer drought did slow down the flow for a few weeks but the prolonged summer kept the bees busy.

It’s great to get back into the blog again. Sorry for the hiatus. I hope you had a great honey season this year.

Wishing you a blessed 2013 to you and your family and your bees.
Posted by Bee Magic Chronicles for Kids at 11:09 PM 4 comments: