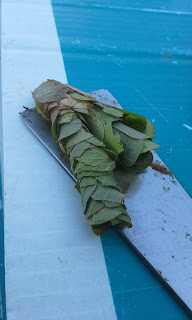 Have you ever seen the perfect round holes cut into a broad leaf plant?  I have and I always wondered who did it?

It's the leaf cutter bee.  I have several Eastern Red Bud trees and they have very large heart shaped leaves.  Leaf cutter bees really like these leaves. 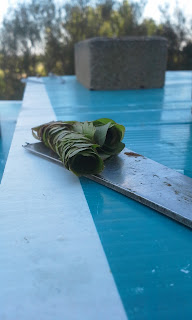 Once I saw a bee on the tree but she flew off too fast for me to get a better look.  So the photos are not mine.

But I did get these photos of the actual nest.

In one of my bee yards I have bricks on top of the hives to give weight against wind or predators.

One of these bricks has a groove in the top and I had it upsidedown. 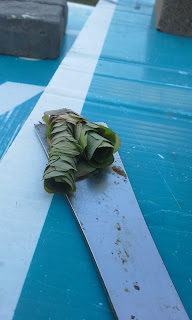 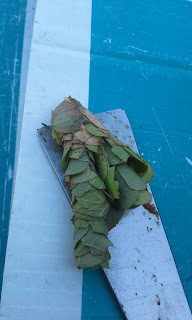 This happened to make a perfect nest site.

Of course I never did this intentionally and discovered the nest when I lifted the brick up to do an inspection.

I used my hive tool to carefully lift up the two nests and shifted them to the hive next door while I worked on my hive.

Then while I was carefully putting everything back the way it was, mom came by.

She fussed with the leaves which I had disturbed a little bit and then she crawled into the end piece, obviously to lay an egg.

I thought she'd be a much bigger bee, but she was about the same size as a honey bee, with black and yellow stripes.

The leaves are rolled and folded like oragami.  It's amazing.  Then each leaf cup is nested into the next,.

Each cup would hold pollen and an egg which would pupate and then wait until spring to hatch.

The whole nest is very delicate because it's not glued together.

These bees are important pollinators for flowers and fruit trees.

So cool.  I put everything back very carefully.

Then I found another brick with the groove and I turned it upside down too and put it beside the other one.

Just in case she needed more room for her nest.
Posted by Bee Magic Chronicles for Kids at 6:03 PM No comments:

Tell the Bees. Such Sad News 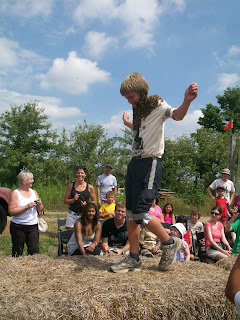 There is a saying in the beekeeping world that when a beekeeper dies you need to tell the bees that he or she has passed away.

We're telling the bees today that a very young man, 17 years of age, Jordan Hiemstra passed away on 23 Sept 2016.

We're all stunned and shocked at this sudden loss. 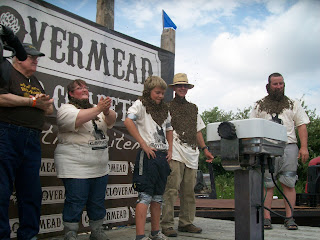 Jordan's family run the farm and Jordan started working there at a young age.

He showed me how to do old fashioned hand dipped candles in their set up for people to try.

The next time I met him we were both having bees poured on us to create a bee beard for the Bee Olympics at Clovermead.

It was the first time for both of us to wear a beard and we were nervous. 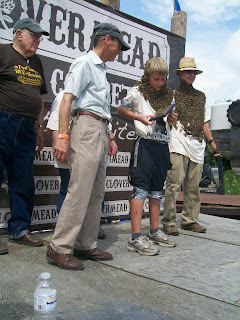 After the bees were on, we danced down the straw bale runway wearing our beards.  It was good fun.

I'm so glad I have this lovely memory of him to share.

Please keep his mom and dad and family in your prayers.
Posted by Bee Magic Chronicles for Kids at 6:03 PM No comments:

Honey is all off 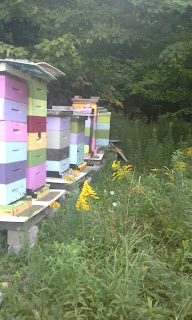 Ahhhh.  Finally it's that time of year when the almost daily trips to the yard are slowed down.

I finally got the last of the honey off the hives a couple days ago.  Dad (Lorne) does the processing so he'll be busy with that.

[photo before honey was removed]

We learned over the years to take honey off bit by bit all summer and that way we're not trying to process 20 or more supers all at once.  The little bee room couldn't fit all those boxes at once!

Another upside is that by processing all summer you don't have to keep running out and buying supers.  The first few years we didn't take honey off until Aug and I'd have to keep buying supers and stack them up on the hives.  And I'm a shorty so reaching those boxes I needed a step ladder. 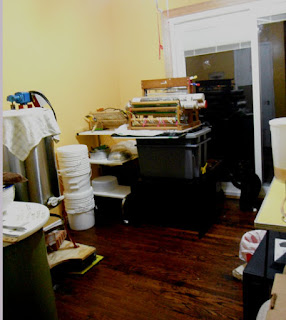 All the hives have done well this year.  Not a bumper honey crop but a reasonable one.  I did leave most of the honey last year so I began taking that honey off in spring.  A few hives I left with extra boxes because they didn't have a lot.

[Photo of our bee room]

One have had gone queenless.  I missed that so I'm not impressed that they got to the point of a drone layer and I didn't notice.  There are still a lot of workers though.  So put in a queen in a cage, along with a frame of brood from another hive.  Before doing this I shook out all the bees, mostly to shake out the drones, and took away the empty and near empty boxes.  Because they didn't have much honey - it looked like one box got robbed out, I gave them a super of capped honey.  I reduced their entrances top and bottom.

Glad to see they started guarding within hours and I think that queen pheromone will give them a huge morale boost.
Posted by Bee Magic Chronicles for Kids at 2:02 AM No comments:

My first year of beekeeping we had a terrible cold summer with rain almost every day.  The bees had a hard time getting their honey to cure.  Some of my honey from my first crop fermented.  But I ate it any way. 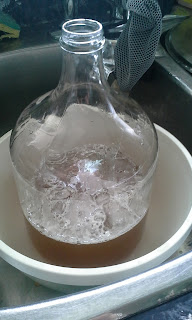 In subsequent years I'd have some honey get a slight fermented flavour and so I learned that some seasons the honey hasn't dried enough.  Often at the end of the season we have to remove frames of honey that aren't capped yet and that honey has more moisture in it.

I asked my mentor Henry what I should do with my honey that had too much moisture in it.  He said, "Make mead."  In case you didn't know, mead is wine made with honey = honey wine.

Often when the wetter honey from those uncapped frames is combined with a thicker more cured honey the wetness gets evened out and the honey will end up at or below the recommended 18% moisture level.  And that means it won't ferment.

That's where the importance of a refractometer comes in.  They are expensive and when starting up there are so many costs that it's often not purchased.  Until you get one you can save money and possibly your honey by taking samples of your honey to a beekeeping friend so they can test your honey with their meter.  Or maybe they'll let you borrow theirs. 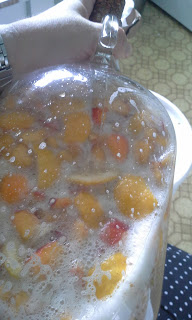 When you know the moisture content of your honey that will tell you whether you need to get the dehumidifier going in the honey room to dry it up more.... or do what Henry advises and make Mead.

If you're in Ontario then you know we've had some really too hot to work days and then other days with rain.  I'd thought about making mead but I was concerned it would be too complicated.

Surprisingly, it's not.  I mean, if a Viking can do it without special equipment, so can I, right?  I did discover on two occasions I actually made mead but was unaware of it.  One occasion was when a couple inches of honey was left in a pail.  It had the lid on but it wasn't an airtight seal.  When I took the lid off months later there was about 2" of a thick white foam on top of the hoey and a soft pop sound when the lid came off.  The liquid was incredibly sweet, and alcoholic.  Viola!  I had inadvertently made mead.

[Pictures are of Peach mead]

Another occasion I accidentally made mead, I had some honey in a small jar and it must have had too much liquid in it because it totally turned into mead.  I can see why so many believe that honey was the first alcoholic drink man discovered.  Honey with a little water in it just seems to like to ferment and create mead out of itself without your help.  The combination of honey + water + a good airbourne yeast and it's off to the races. 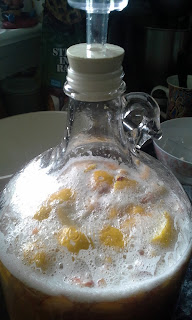 The basics of making mead is putting several pounds of honey in a container, adding water, adding packaged yeast and then what's called an airlock - this could be a balloon with a pin hole i it (if you ever watched the TV show MASH then you would have seen Hawkeye's booze set up with the surgical glove as an airlock).  There are plastic airlocks that are most commonly used.  The way they work is they prevent oxygen getting in, but they allow the carbon dioxide to escape by bubbling out through water in the airlock.  The water is the barrier to stop the air getting in.

Adding fruit to mead is very popular and there are many examples and how to's on U-Tube and books.

The outlay of expenses to start up is very reasonable and many people make one gallon quantities first just to see if they like it.  Many of the references will mention the importance of "sanitization".  Just to clarify, that doesn't mean scrubbing everything with scalding hot water.  What it means is that your utensils and equipment are properly and normally washed and then are given a dip or quick soak in a safe chemical solution that is designed to kill all yeasts.  This way the only yeast introduced into your batch is the one that you pour in from your package. 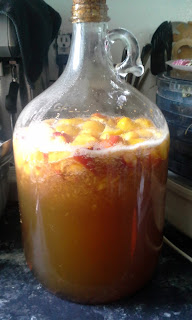 What's really hilarious is that I'm not much of a drinker but I got really addicted to making the mead.  I have 11 gallons bubbling at the moment.  Most meads are "racked" which means the liquid is syphoned out into an empty jug leaving the old fruit or dead yeast behind (which gets thrown into the compost).  The clearer syphoned mead is again topped with an airlock for a about a month long sit until it's done fermenting.

Usually racking is done twice to make the liquid less cloudy and then you bottle it.  Most mead can be drunk after about three or four months.  Or like cheese, you leave it to age and the flavour just improves over time.

What I found surprising is that you can actually taste your mead at any point in the process to see how it's coming along and then make adjustments to improve the flavour.

Making mead is easy but patience for it to be ready to drink might be the hardest part.

One last thing, if you find a recipe off the internet or Pinterest, be sure to run it through the Mead Online Calculator because it'll be able to tell you how much honey and if you're using fruit it'll let you know how much is required.

Here are some links if you want to learn more, and a couple books to consider:
Book: Complete Mead Maker (Amazon.ca)
Book - How to Make Mead Like a Viking (Amazon.ca)
Online Forum: Home Brew Talk
Supplier: Danny's Wine & Beer London ON
U-Tube VIdeos: The Joy of Mead
Facebook: Wine & Mead Enthusiasts
Posted by Bee Magic Chronicles for Kids at 11:14 PM No comments: