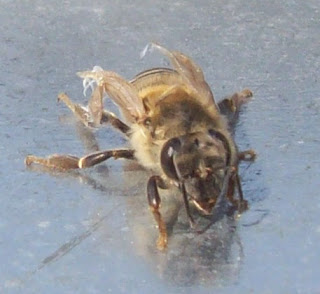 Vampires are a really hot item these days in novels and movies. Both kids and adults have their PG and R rated versions of programming that we can watch... and enjoy.
But this is no pleasure and this one is a real X-Rated Horror.
Click the picture to enlarge the photo and you'll see why.
I found her outside her hive. She'd been evicted by her sisters. They probably didn't want to but they knew they had to.
She'll die of course. Probably later that night as the temperature dropped and the spring air cools her body. Whether her hunger or the cold air would get her first, I'm not sure. I don't want to think about it. 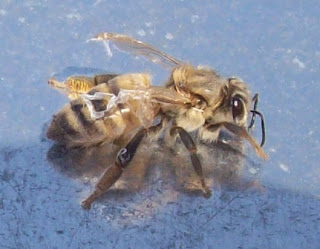 I hated seeing her suffering. I wouldn't feed her either--not because I didn't want to--but because I knew it would only prolong the suffering and unavoidable death.
She can't fly and she could barely walk. Her abdomen is deformed. Probably her internal organs aren't functioning well either.
Are you wondering why?
Because of a vampire called Varroa Destructor. Varroa Mites were inside this bee's cell when she was a defenseless pupae, capped and waiting to make her final metamorphosis into a worker bee.
They fed so well on her--latching onto the thorax, her back, where there's a good supply of blood to suck on. They fed so vigorously that they destroyed her tissue. Her body could not develop normally and her wings and body are malformed.
She'll never fly. She'll never be a nurse bee. She'll never fulfill the role she was born to do.

It could be Deformed Wing Virus (DWV). Mites are dirty mouthed and like mosquitoes they not only steal a blood meal, they spread germs and disease as well. 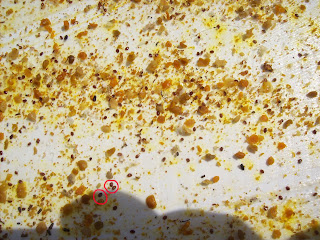 What can the beekeeper do? There are various methods to treat the hive, some organic and others not. For myself, I'll be using a natural product called Formic Acid. The fumes it creates eats away at the mite's shell and weakens/kills it. The weakened mites lose their grip on the bee's fur and falls. Hopefully the fallen mite will land on the greased board sticky board at the bottom of the hive where it will stick and be held until it dies.
Photo - Here's the sticky board - it's plastic cardboard that sits under a screen at the bottom of the hive. The bees can't get through the screen (called a Varroa Screen) but the mites do. It's been greased with Crisco Shortening.
Use Crisco, vaseline or any product that will make the board sticky - this will trap and hold the mite preventing it from climbing back up in the hive and find another bee to latch onto.
To see the mites in the photo - you can easily count them. Click on the photo to enlarge. I've circled a couple in red so you can see what they look like. 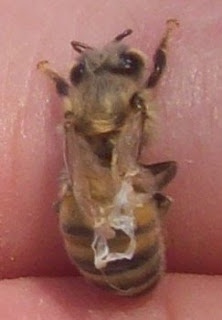 Hive #2 is a concern - it was heavily infested before the Formic Acid was put in the hive. The photo is from after the Formic was put in place.
To determine the level of infestation beekeepers will put in a cleanly greased board and then return in either 24 or 72 hours. If 72 hours, divide the total mites counted on the board by 3 to get the daily drop levels. Anything over 20 is considered a very heavy infestation.
To determine the effectiveness of the treatment, a count is also done, again on a clean board, while the treatment is in place.
With the Formic Acid pads fumigating the hive a lot more mites are falling. I'm certainly not sorry to hear that!
This girl will never fly or enjoy being a nurse bee but I hope I've given her short life meaning in a new bee task as an Education Bee. Let her example help you make decisions on how you'll care for your hives.
Posted by Bee Magic Chronicles for Kids at 7:28 PM 1 comment: 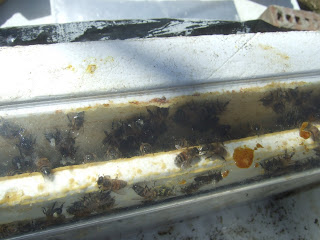 I'm back! Actually, I never left but I did get pretty busy for a few weeks.
My next few posting will be catch-up and to make a record of my activities over the last three weeks.
(Photo - bees under the plexi-glass panel of the hive top feeder).
First, how are YOUR bees? Did they survive the winter? Are you feeding and/or doing mite treatments? What treatment plan are you following? I look forward to reading about your hives or interest in the comments.
My bees survived the winter. Yeah!!! My first two hives. Our Canadian winter was very mild which was unusual.
I started feeding a 2:1 sugar/water syrup using a hive top feeder the second week of April. Temperatures had gone up considerably with some days as high as 26 degrees Celsius. That is unseasonably warm. I did leave the winter wraps on the first week of April while the nights were still pretty cool. 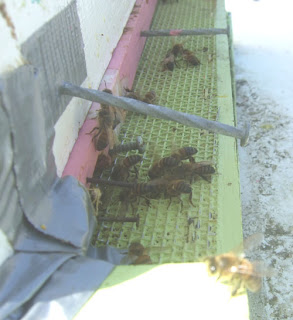 Spring took me by surprise so I wasn't ready as quickly as other experienced beekeepers to put in the pollen patties and get the syrup on. I think I'm about a week behind the professional beekeepers.
I ordered pollen patties from Munro Honey. They come rolled flat and cut in a rectangle. The pollen is mixed with honey and maybe some vitamins and is put between wax paper. I laid them right on the top bars of the hive. No rim spacer was required since the patties fit in the small space between the tops of the frames and the inner cover.
(Photo - as soon as the hive winter wraps came off, the bees in Hive #1 set to sending out homing scents for returning bees to follow - note their rears up in the air).
The bees were landing on the patties even before I could get them on the hive. They must smell good. They look like peanut butter, brown and sticky. 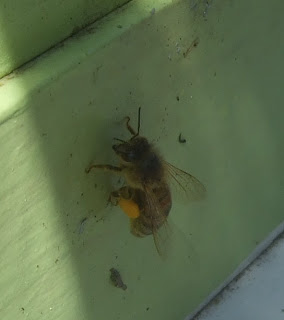 Hive #1 with the purchased queen appeared to have more bees than Hive #2 with their own made queen. I must note that I feel I took too much honey from Hive #2 last season, considering the poor weather we had the bees didn't get a chance to build up more honey after I took a super from them. I feel that set them back a bit.
Ontario has gone on record (maybe all of Canada but I can't confirm that) that last year was the worst honey year ever. Beekeepers reported bringing in half the amount of honey as usual. Winter kill reports haven't been done yet but the Ontario Bee Association and Tech Team will be surveying beekeepers to get the stats.
The unofficial report at our last local bee meeting gave percentages of losses from 20 to 50%.
Hive #1 ate their 2 patties in a week while Hive #2 still had one left. I gave them both more. Hive #1 was also taking down the syrup faster. It was obvious that the Hive #1 has more bees than the other.
The bees were bringing in lots of pollen. I think the foraging at this new bee yard will be much better than the damp dark swamp.
Let's hope for a great summer for the bees... and us.
Posted by Bee Magic Chronicles for Kids at 11:27 PM 4 comments: 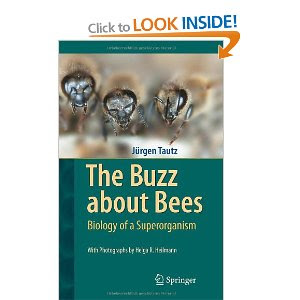 What a wonderful surprise to hear personally from the author of the book I had blogged about. You can find the book, The Buzz About Bees on Amazon.ca. There are more reviews of the book on Amazon.com as well.

Here's what the author had to say:

"If you want to see hot bees coming and going in a life stream online, please go to http://www.hobos-online.de/.

HOBOS is being build piece by piece, so a visit there from time to time allows to follow the progress. We will have also webcams inside the colony to study heater bees at work."

HOBOS (HoneyBee Online Studies)is an internet portal, giving access into the life of a honey bee colony for the purpose of education and research. Honey bees are key organisms for understanding aspects of behaviour, ecology and agriculture.

Read more about HOBOS and BeeGroup on this BeeGroup website.
Posted by Bee Magic Chronicles for Kids at 10:52 PM No comments: