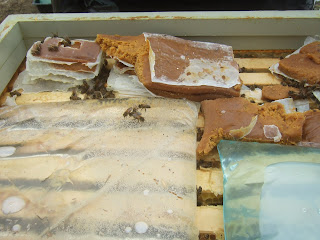 There's probably only one thing that irritates bees more than stealing their honey.

And that's an absentminded beekeeper.

It turns out that in my last visit I not only forgot my boots. I forgot to use my box cutter to put slits in one of the sugar baggies on Hive #1.

The bees were crawling over it. Oh, they knew what was inside but they couldn't get at it.

I apologized and quickly slit their baggie. I gave them an extra large helping of patties. 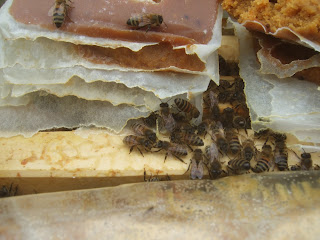 Nuc #2 had not eaten their sugar syrup and I checked the baggies and they were slit. They were busy eating the patties so I gave them more.

Nuc #1 was busy eating everything and I topped them up with fresh baggies and more patties.

Hive #2 is doing well--this is the one I was concerned about. They were busy eating pollen but they hadn't finished they syrup yet. 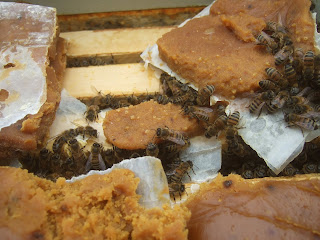 Hive #1 had consumed one baggie and the second was the one I forgot to slit. They were also munching on pollen patties.

Outside the hives sadly, I noticed lots of little round melted holes in the snow in front of the four hives--little tombs where bees flew out and hit the snow and got too cold.

They probably ramped up their muscles to generate heat to fly but instead it caused the snow to melt around them and they sunk down deeper into the snow.

I closed the hives and put the wraps back on. 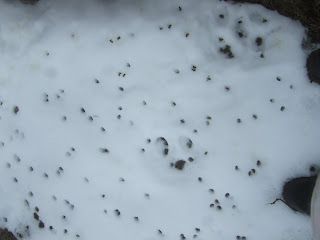 I have not done a Fumigilin treatment in their syrup yet because it needs to be eaten quickly by the bees to be effective.

I'll wait another week or so until it's warmer.

Oh, and this time, I had my boots.
Posted by Bee Magic Chronicles for Kids at 3:01 AM

Great blog, Barb! What a facsinating hobby! Thanks for sharing this.