How bees talk to each other about flowers.
Fun Fact: A small percentage of older bees will act as scouts and search for new flowers. When she finds a good source of nectar or pollen she'll return to the hive and inform her hive mates where the source is by doing the Waggle Dance to recruit foragers to go and collect this food.
At the hive there will always be a reserve of forager bees that are waiting for this call to duty. Some people have said their bees are lazy because they're sitting around doing nothing but that's not the case. They're waiting for the scouts to come back and dance.
For food sources farther away, the scouts use the sun as a compass and they will do the Waggle Dance. The dance floor is actually chemically signposted by the bees.
She stands on the comb and shakes her body side to side at a rate of about 15 times a second. Then she does a Waggle Run in a circle back to the point where she started waggling, She repeats the waggle phase and again runs a full circle, but this time in the opposite direction to the starting point. The two paths together approximate a figure eight lying on it's side.
For feeding sites that are close by within 50 to 70 m the bees will perform a Round Dance. This dance reveals only some info--mostly about where to look and that it's close by.
Source: The Buzz about Bees and Dr Tom Seeley UTube videos
Note that the author Jurgen Tautz states that there are many more forms of communications that are unknown as yet.
Originally the waggle dancing was discovered by an Austrian biologist Karl Von Frisch in the 1940s.  Here is a video where they have recreated his experiment to learn how the bees communicate through the dances.

Posted by Bee Magic Chronicles for Kids at 2:10 PM No comments: 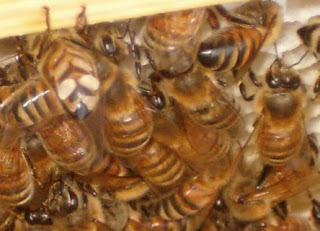 Fun Fact: Bees have pockets.
Bees produce beeswax from their own bodies. On the underside of their abdomen are four pairs of wax glands. Under the wax glands are tiny pockets which hold the wax scales as they are being made.

When a wax scale is ready for use, the bee takes it out of the pocket by spiking it on the strong hairs of her back legs, and then passes it to the jaws.

There it is chewed, and other materials may be mixed with the wax. When it is soft, the worker puts it into place on the comb being built.

Source: Life of the Honey-bee - A Ladybird Natural History Book
Posted by Bee Magic Chronicles for Kids at 10:42 AM No comments: